“We believe that voters should choose their politicians, not the other way around,“ a community leader shared at the first redistricting hearing.

The redistricting process has officially begun in Georgia. 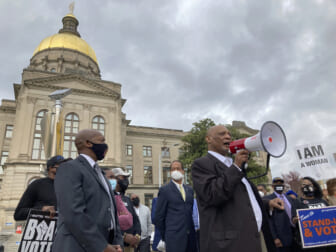 Georgia lawmakers met in an online hearing on Tuesday to launch this process, drawing activists and community members from across the state. From Gwinnett County to Cherokee County, participants spoke during the meeting that lasted a little bit over an hour.

“This is the first step in a long process,” said Senate Majority Leader John Kennedy, R-Ga. as he opened up the meeting.

“It’s going to be more challenging this time because of delays we’ve had in the Census data collection process, of course related to COVID-19 last year.“

He sat alongside co-chair of the Reapportionment Committee, Georgia House redistricting chair Bonnie Rich, who is a Republican from Suwanee, to facilitate the meeting. They said they want to hear from everyone — Democrats, Republicans and Independents — with hopes of using that information to help redraw the maps.

“At each of these hearings, we will hear what people in different parts of the state want to tell us about their area and the process for drawing plans,” Rich said, adding they will also be collecting written comments from Georgians in an online form where people can submit their testimonies.

The chairs said they are committed to an “open, fair redistricting process.”

But throughout the meeting, activists and community members doubted that open and fair notion, expressing deep concerns about the process.

There were several students who participated and one Georgia Tech student even took time out of class to speak.

“All across the state, Georgia’s campuses of nearly half-a-million students are gerrymandered and sliced in ways that stifle the voices and interests of the next generation of Georgians,” said student organizer Alex Ames.

“From Kennesaw to Athens, our schools are divided so that even though our state had the largest youth turnout in America last year, our votes are worth less. We all want American citizens to be active participants in democracy, but what does it teach our students when we draw our maps so that even when they do vote, their voter efficacy is stifled.”

Amex, who is an active organizer with Students against Sonny, joined several other organizations in raising their voices. Many called for open and transparent dialogues along with more opportunities to provide testimony.

They also criticized the way the first meeting was shared with the public, saying lawmakers gave too short of a notice regarding the details. Southern Poverty Law Center and Asian Americans Advancing Justice-Atlanta were among the many groups present.

Mishara Davis, vice president of political and civic engagement for Women Engaged, also had a message to share with the committee.

“We believe that voters should choose their politicians, not the other way around,“ Davis said. “Thorough redistricting ensures that political leaders will be held accountable by their communities.

Historically, we know that race is always a major factor in unfair gerrymandering. The intentional manipulation of the redistricting process to reduce the political power of certain racial groups from Georgia and across the nation is well documented.”