"I try not to think about it," said Biles, "because I can't afford to — if I let them rule me, then they're winning."

Gymnastics superstar Simone Biles talked about the difficulty of returning to competing for Team USA Gymnastics after being sexually assaulted by the team’s former doctor.

Larry Nassar was sentenced to 175 years in prison in 2018 for sexually abusing women and girls for years during his tenure at Michigan State University and as the official Team USA Gymnastics doctor.

In an interview with Glamour magazine for its June 2021 cover story, Biles said her way of coping with the abuse is “probably by compartmentalizing. I try not to think about it because I can’t afford to — if I let them rule me, then they’re winning.”

“I know I’m doing it for me. I do it because I still have such a passion for it,” said Biles of her return to the sport. “I think that’s been the hardest part.”

Biles looks glorious in the Glamour photos, taken by Kennedi Carter, in which she is dressed in ensembles of black and white ensemble with a floor-length braid of her hair coiled in red, white and blue ribbons.

The 24-year-old Biles recently won her seventh national gymnastics championship, more than any other woman in history. She has won every all-around gymnastics competition since she entered the U.S. Championships in 2013. 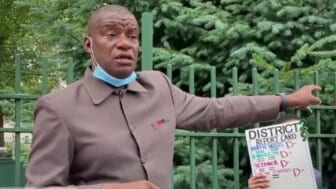 If she qualifies, Biles will compete for the gold in Tokyo this summer.

The incredible competitor has been a voice for change within USA Gymnastics since Nassar’s sentencing. When the organization posted a message celebrating her birthday in 2020, she clapped back, writing, “how about you amaze me and do the right thing… have an independent investigation.”

Earlier this year, Biles told Hoda Kotb that returning to gymnastics was about more than just competing. “I just feel like [with] everything that happened, I had to come back to the sport to be a voice, to have change happen,” Biles said. “Because I feel like if there weren’t a remaining survivor in the sport, they would’ve just brushed it to the side.”