The British thespian joins the 'Fast and the Furious' series this summer with 'F9,' and also stars in Netflix's upcoming film, 'Army of Thieves'

In a recent interview with Women’s Health magazine, F9‘s Nathalie Emmanuel opened up about her relationship with her body image, food, and more, revealing that social media ultimately helped her come to a powerful realization.

Known best for her television role as the fan-favorite character Missandei in Game of Thrones and for starring in Hulu’s Four Weddings and a Funeral, the British-born actress is gearing up for a major year in film. She appears in the upcoming Fast and the Furious sequel, F9, as well as Netflix’s upcoming film, Army of Thieves. 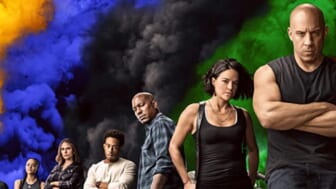 The actress revealed how social media helped her work through some body image issues she was struggling with internally in the intimate interview.

Emmanuel shared in the cover story, “You know how on Facebook it shows you a memory of yourself from six years ago or four years ago? A picture came up on my phone, and I went, ‘I look so great!’ But I also remember that at the time [of that photo], I thought I was overweight and needed to do all these unhealthy things.”

She reveals that the realization was when she shifted how she thought, learning that “we just beat ourselves up constantly, and we’re never perfect enough.”

She continued, “I had to change how I interacted with exercise and decide what I wanted to get from it.”

The story then goes on to describe Emmanuel’s relationship to fitness now, including a workout routine that is more “focused on achievements rather than measurements,” which ultimately “is about striving to be the stronger, better version of herself.”

Her current routine is a mix of cardio, strengthening, and sometimes, Emmanuel’s favorite workout, yoga.

She shared, “What I love about yoga is there’s no pressure to be the best at it. Even if you just lie on your mat for the hour and breathe with intention, you’re doing yoga.”

Not only do the physical benefits of yoga attract Emmanuel but the mental ones do as well.

“My mental health was deteriorating, and I took my first class in reaction to it.”

The actress also opens up about her journey to veganism, what she’s looking forward to this summer and more, in the full cover story. Read the profile on the Women’s Health website here.