The rapper's Yeezy Foam Runner launched in 2020 and immediately sold out at $80 a pair, while Walmart's knock-offs are currently on the site for $25-$30

Kanye West is protecting his brand. According to recent reports, the rapper and fashion designer filed a lawsuit against Walmart for selling knock-off shoes.

West’s Yeezys are some of the most identifiable shoes in the game, with unique designs easily associated with the multi-talented rapper. Launched in 2020, his latest iteration of the much-sought-after sneaker is the Foam Runner, a sleek slip-on shoe with an incredibly unconventional and specific design.

Now it seems look-alikes have been popping up all over the internet, including on sites like Walmart.com, and West is not having any of it. 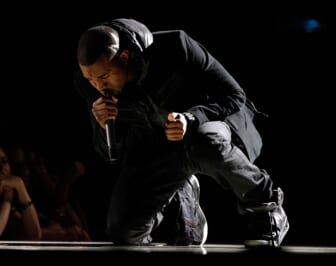 Per legal documents obtained by TMZ, West is claiming that Walmart copied his Yeezy Foam Runner and is leaving consumers confused in the process. TMZ reports, “Kanye claims Walmart could be costing Yeezy hundreds of millions of dollars in sales by doing so.” When the sneakers first launched in 2020, they were sold at $75.00 a pair and sold out immediately.

West is reportedly accusing Walmart of trying to “cash in” on the popularity of the runner that Yeezy established. The website is currently selling the look-alike sneakers at $25 a pair, a significant price decrease from the original $75. According to TMZ, West and Yeezy’s team sent a legal warning to the retailer, telling them to remove the shoes from their website, but have reportedly failed to comply.

Now, West and Yeezy are suing Walmart for major damages.

As theGrio reported last year, West’s various business ventures have paid off for the rapper, as he was crowned Hip-Hop’s second billionaire by Forbes in 2020. Joining the likes of Jay-Z, Forbes appraised his assets in 2020 and revealed they added up to $1.26 billion.

As theGrio‘s Matthew Allen reported at the time, “Much of West’s riches come from his Yeezy fashion brand. The shoe collaboration with Adidas, launched in 2015, produced approximately $1.3 billion in sneaker sales in 2019. West’s royalty stake in the shoe deal is about 11 percent, meaning he earned $140 million from the sneakers, according to Forbes estimates.”