Will Smith took to Instagram to post a video of Pinkett Smith dancing with her mother, Adrienne Norris, and her daughter Willow Smith, with the caption, “RED TABLE TALK WON ITS FIRST EMMY!!”

The three women host the show which tackles “current social and cultural issues with an inter-generational perspective,” according to the show’s website.

Pinkett Smith also posted a video of her reaction when she found out about the Emmy win. She excitedly ran up to her friends and hugged them during an event on Saturday. She jumped around before finding Norris for a long embrace. She later posted a series of joyful photos of the event.

Red Table Talk was up against NBC’s The 3rd Hour of Today,” ABC’s GMA3: What You Need to Know, Tamron Hall, and Facebook Watch’s second iteration of their Red Table Talk show, Red Table Talk: The Estefans, which has a similar concept but is hosted by Gloria Estefan, her daughter Emily Estefan and her niece Lili Estefan.

Red Table Talk has seen several notable guests this year including Niecy Nash, Paris Jackson, Tamika Mallory, and Kevin Hart. As theGrio previously reported, Hart spoke with Smith, who was a special guest host on the show for Father’s Day, about his daughter and about fatherhood.

He told Smith that his 16-year-old daughter Heaven told him to stop disparaging her mother, his ex-wife, Torrei Hart, in public.

“My daughter had a talk with me about her mother that rocked me. She checked me,” Hart said. “She said, ‘I want you to stop … because when you say these things, Dad, this and this and this.’ ‘But, honey, I don’t mean — I’m just talking.’ ‘It doesn’t matter, Dad.’”

For his part in the men’s roundtable discussion, Smith shared that he and his ex-wife, Sheree Zampino, had also discussed how he talks about her publicly. According to the superstar, Zampino said, “Whatever you say, the world is going to punish me for that, so you are giving people permission to say and do things to me on the street.” 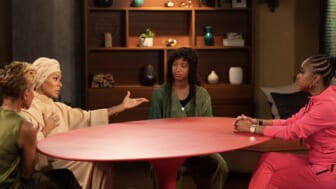 Also Read:
Tamika Mallory talks Ma’Khia Bryant on ‘Red Table Talk’: ‘She’s a child and we saw her laying on the ground’

The show has often been the first stop for celebrities after a controversial event has put them on the outs with fans. Last year, Olivia Jade Giannulli, Lori Loughlin’s daughter and one of the high-profile figures in the college admissions scandal, came to discuss privilege on the show. In 2019, after polarizing statements about his daughter Deyjah Harris’ virginity, T.I. went on Red Table Talk to explain his comments.

The 48th annual Daytime Emmys were awarded on Friday and remained in a virtual format this year due to the COVID-19 pandemic, according to Entertainment Weekly. Sheryl Underwood hosted the show for the fifth time but did not have a cohost this year.