EXCLUSIVE: For Pride Month, theGrio sat down with U.S. Representatives Mondaire Jones and Ritchie Torres, who both made history this year as the nation's first openly gay Black men to serve in Congress

Earlier this year, U.S. Congressmen Mondaire Jones and Ritchie Torres made history when they were sworn in as the first openly gay Black men to serve in the United States Congress. Their 2020 congressional elections, both in New York, catapulted them as luminaries in the LGBTQ+ community, and as politicians at the intersection of race and sexuality, cemented them in American history books.

“The sense of awe has not yet faded,” 33-year-old Rep. Ritchie Torres, who is also the Congress’s first openly gay Afro-Latinx member, told theGrio. “Every time I set foot on the House floor, I cannot help but feel the weight of history on my shoulders. I feel like the most grateful person alive and my life has been a journey; from poverty in the Bronx to the House of Representatives in Washington, D.C.”

Mondaire Jones, 34, reflected on the countless messages he received from across the country and around the world from those who said they were inspired by his historic election.

“It’s not something that I had when I was growing up. I grew up thinking that someone like me could not run for Congress, let alone get elected,” Jones told theGrio.

As Pride Month comes to a close, millions of proud LGBTQ+ Americans and allies have celebrated the visibility and vibrance of the community with observances from D.C. and Atlanta to most recently in San Francisco and New York City.

But for these history-making politicians, having pride in their identity as Black gay men didn’t just happen overnight. Torres and Jones’ coming out stories are different, yet both New Yorkers recalled as youths not having the Black gay role models they ultimately have become themselves for a generation.

“It was a long time coming when I finally came out to people at the age of 24 years old,” shared Jones, who said he started coming out after watching the groundbreaking 2005 Logo original scripted series, Noah’s Arc, which followed the lives of a Black gay male friendship circle living in Los Angeles. 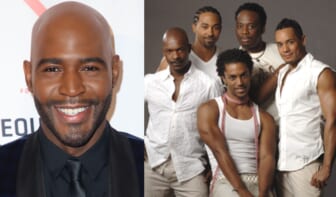 “I was aided mightily by Noah’s Arc, which my Black female friends encouraged me to take a look at. I saw for the first time openly gay Black men in loving relationships, which I had never seen before,” he recalled. “At the time, Noah’s Arc was off the air.”

Also during that time, musician Frank Ocean had revealed that songs from his debut album, Channel Orange, were inspired by his love for another man. This culminated with the discovery of Noah’s Arc had played a pivotal role in Jones’ decision coming out.

“It was reaffirming for me to continue to tell people that I’m gay. And I know that for so many other folks, they have different stories about what helped them come out. Ultimately, having a close network of friends and family members who I knew would be supportive no matter what was very helpful as well,” he said.

Torres said he first came out in high school after he discovered that one of his teachers had disclosed that he was gay on MySpace — when the social media platform was still “in voque” he noted.

“That prompted me to approach him and then spontaneously I came out and that single encounter was the beginning of a years-long process that ultimately culminated in my candidacy for the city council,” said Torres.

“When I ran for the city council, I was out to family and friends and colleagues, but not to the wider world. And I said, if I’m going to run to be a public official, then I have to live with integrity. Both in my professional and personal life, I have to be honest and open about who I am, and so I chose to run as an openly LGBTQ candidate and I’ve been fully open ever since.”

The LGBTQ+ community has come a long way since the Stonewall Riots that ignited the Gay Liberation Movement and the HIV/AIDS epidemic, which disproportionately took the lives of countless Black and brown members of the community. The Supreme Court ruled same-sex marriage as legal nationwide in 2015 and LGBTQ+ Americans can now serve openly in the Armed Forces.

But while there have been strides for the community, evidenced by the elections of Jones and Torres, there remain great challenges for the equality of LGBTQ+ people, particularly the trans community, who are targets of violent hate crimes and bills attempting to block them from using public bathrooms ascribed to their gender identity, as well as legislation attempting to ban trans children from youth sports.

Congressmen Jones and Torres say now is the time more than ever to pass The Equality Act, which would amend the Civil Rights Act of 1964 to include sexual orientation and gender identity as protected civil rights against discrimination under federal law.

“The Equality Act is based on a simple truth that none of us should be evicted or fired or denied critical accommodations or services simply because of who we are or who we love. We are all equal. We are all entitled to equal protection under the law, regardless of sexual orientation or gender identity,” said Torres.

Jones, who said he is a “proud progressive LGBTQ+ person,” said that in addition to The Equality Act, equity for LGBTQ+ Americans, particularly those who are Black and brown, also makes the case for liberal policies like a single-payer health care system and student debt cancellation.

“The solution must be a single-payer Medicare For All system, the only health care policy that would ensure health care as a right in the richest nation in the history of the world,” he said.

“When I look at the student debt crisis, and I’ve been recognized as a leader on the move to cancel student debt in this country, LGBTQ+ individuals disproportionately have student debt and on average have $16,000 more in student debt than their cisgender heterosexual counterparts.”

The Equality Act was passed by Jones, Torres and their colleagues in the U.S. House back in February. But like most Democratic policy agendas in this current session of Congress, the bill is being held up in an evenly-divided U.S. Senate, where it’s unlikely to get the 10 Republicans needed to advance the bill.

This, along with other bills that have been passed in the House, is why both Jones and Torres say now is the time to amend or abolish the filibuster, a Senate rule that requires 60 Senators to end debate and put up a bill for a vote. What’s more, Jones called out fellow Democrats Sen. Joe Manchin of West Virginia and Sen. Krysten Sinema of Arizona for essentially blocking legislation like The Equality Act by refusing to do away with the filibuster.

Jones called the filibuster a “Jim Crow relic” and said it should be outright abolished in the upper chamber of Congress. 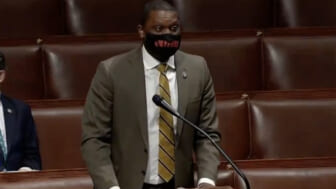 He added that Americans, and elected officials such as himself, need to “educate people about the accidental origin of the filibuster.”

“It was created accidentally in the 1800s and its racist, anti-democratic use throughout the civil rights movement, and more recently today because we also see voting rights being blocked right now with trying to pass a major democracy reform and voting rights package,” said Jones.

Manchin and Sinema, he said, are “ standing in the way of delivering for the American people because voting rights is the pathway to all the other things we want to see happen in this country. These things like The Equality Act are broadly popular with the American people, but we need our representatives to be responsive to the American electorate.”

Despite the hurdle for obtaining true equality for LGBTQ+ Americans, Jones and Torres offered messages of hope and encouragement to members of the community.

“My pride message is to love yourself because you are special, you are talented, you are beautiful, you are strong,” Jones said, “And you have now a member of Congress, really multiple members of Congress and other folks increasingly in elected office and in law and in business and in science who are going to be supportive of you, who are going to be working to create a space for you and to ensure your equality and equitable treatment in our society.”