Gwen Berry is coy about whether she’ll protest anthem, flag at Tokyo Olympics

U.S. track and fielder Gwen Berry demurred when asked by CNN’s Don Lemon if she plans to protest America’s national anthem at the 2021 Olympic Games in Tokyo.

Gwen Berry, who specializes in the hammer throw, protested the anthem last Saturday as she accepted bronze at the U.S. Olympic track and field trials. During the event, held in Eugene, Oregon, Berry turned her back to the flag and draped a T-shirt over her head that read, “Activist Athlete.”

She also addressed statements from White House Press Secretary Jen Psaki, who was asked by Fox News if President Joe Biden thinks Berry’s actions were “appropriate behavior” for someone who hopes to represent Team USA. Peter Doocy played a clip of Berry’s protest, which Psaki said she had not specifically discussed with the president.

Psaki made clear, however, “I know he is incredibly proud to be an American and has great respect for the anthem and all that it represents, especially for our men and women serving in uniform all around the world. He would also say, of course, that part of that pride in our country means recognizing there are moments where we are, as a country, haven’t lived up to our highest ideals, and it means respecting the right of people granted to them in the Constitution to peacefully protest.”

“I think that was spot on,” Berry said in response to Psaki’s sentiments. “They said it, I respect it,” adding during the on-air discussion, “Let’s be clear: I do respect the Constitution because obviously, I was exercising my constitutional right.”

Gwen Berry had previously criticized “The Star-Spangled Banner,” which makes references to enslaved people yet is held up as an example of freedom. 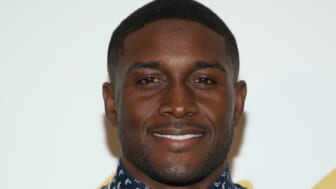 Berry said she will not change her position on the anthem and the flag “until America takes full accountability for the things that Blacks have to face here in America … because we are capable of doing it.”