OPINION: Writer and author Touré says track and field star Sha'Carri Richardson's suspension from the Tokyo Olympics is a reminder of the ridiculousness of the prohibition of marijuana 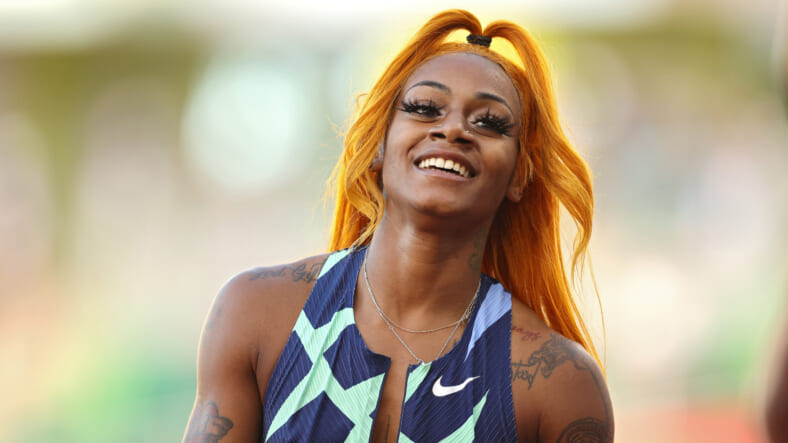 Sha’Carri Richardson looks on after winning the Women’s 100 Meter final on day 2 of the 2020 U.S. Olympic Track & Field Team Trials at Hayward Field on June 19, 2021 in Eugene, Oregon. (Photo by Patrick Smith/Getty Images)

Sha’Carri Richardson was winning the race for Pre-Olympics Most Popular American Athlete and then, suddenly, she wasn’t. She’s still popular — controversy has made her sympathetic and even more famous — but now it’s all complicated.

Sha’Carri was going into Tokyo as the odds-on favorite to end up on a Wheaties box with her flaming hair, her blazing speed, and her audacious confidence. We love someone who knows she’s bad and she knew she was a bad mamajama. But in a twist worthy of a novel, a funny thing happened on the way to the coronation. Her story was upended by the pathetic War on Drugs.

Please miss me with the idea that it’s her fault she took some weed (to get over the pain of the death of her mother) and the Karen-ish argument that she should’ve known better. People have been quick to blame her — a 21 year-old in the midst of the most difficult moment of her life — because it’s easy to place blame on a single person.

Yes, she broke a rule but the real problem is the rule. It’s a dumb one and given how deeply the drug prohibition and the War on Drugs damages the Black community, we should not give any respect to this oppressive rule. If we just follow and uphold bad, immoral rules then society will never advance. The Civil Rights Movement that helped liberate us was powered by the concept of civil disobedience — rejecting and breaking immoral, oppressive rules. So instead of leaping to the simplistic notion of rules are rules and she didn’t follow the rules, let’s do something bigger and more meaningful: let’s critique the institutions for perpetuating a ridiculous prohibition on marijuana.

Why is marijuana illegal? It’s not a performance enhancer, it’s not a steroid, so why is it banned? If Sha’Carri had gotten drunk there would be no problem, but even a little weed is disqualifying? Doesn’t that sound arbitrary? The real problem isn’t that Sha’Carri smoked (or ate) some weed. It’s that we live in a country that prizes the pursuit of happiness yet criminalizes using marijuana. And this country does that because marijuana prohibition helps fuel the Prison Industrial Complex which houses thousands and thousands of marijuana offenders — they are the main product.

And most of them are Black people.

Marijuana is a gateway drug for powerful white people to take the freedom of Black people. Criminalizing marijuana is a big business. And our efforts to police marijuana mean thousands of non-violent Black American drug users are attacked by police while a multi-billion industry is controlled by homicidal criminals who live in other countries. And people like Sha’Carri are penalized for wanting the peace that marijuana brings. This system makes no sense and if marijuana were legalized in America that would crush the underground market, free the police to pursue actual crimes, and create millions and perhaps billions in tax dollars.

Sha’Carri was set to become the face of the Tokyo Olympics but now she’s like the face of the ridiculousness of our marijuana prohibition. I just want to see her run but as The Onion wrote “Dreams Crushed Over Trivial Bullshit Represents Nation Better Than Gold Medal Ever Could.”