Scores took to social media to praise Avant-garde, who makes history as the first Black victor in the competition's 96-year history.

Zaila Avant-garde, America’s brand new 14-year-old national spelling bee champion, is going viral on the internet, and she’s even got the famous and esteemed giving her all the flowers on social media.

As theGrio previously reported, Avant-garde’s victory on Thursday night makes her the first-ever African American winner of the Scripps National Spelling Bee, which has a rich 96-year history (Jody-Anne Maxwell of Jamaica won in 1998).

The home-schooled expert speller and basketball prodigy has garnered the praise of plenty, who say they’re “proud” of Avant-garde. 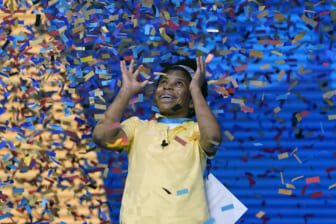 “Three Guinness World Records and now the national spelling bee champ! Congrats, Zaila—your hard work is paying off. We’re all proud of you.”

Next to praise the speller was, of course, his wife, former United States First Lady Michelle Obama. She shared a video of Avant-garde on the app and wrote, “Yes, Zaila! We are so, so proud of you!”

Berry wrote, “Wait … she’s our spelling bee champ and can play like this? Yes, Zaila! LOVE. IT.” — referring to a viral video of Avant-garde playing basketball. As theGrio previously reported, she is “a basketball standout who hopes to play some day in the WNBA and holds three Guinness world records for dribbling multiple balls simultaneously.”

New Orleans Mayor LaToya Cantrell tweeted, of Avant-garde’s historic win, “Talk about #blackgirlmagic! Congratulations to Zaila Avant-Garde, a 14-year-old from Harvey La., for winning the Scripps National #SpellingBee! She’s the First African American winner and the First champion from Louisiana! We’re all so proud of you!!”