Police may have lied about bodycams in Breonna Taylor raid, lawsuit claims

“Breonna’s family has a right to the records,” said an attorney working closely with Taylor's family.

A new lawsuit is claiming that there may be more body camera footage from the night Breonna Taylor was shot and killed by Louisville police.

Lawyers on behalf of Taylor’s family are suing the Louisville Metro Police Department, alleging they may have given the public “misinformation” about the use of body cameras from the night Taylor was killed in her home, CBS News reports.

According to CBS News, the lawsuit was filed on Wednesday by Sam Aguiar, an attorney who’s already been working closely with the family, along with Chymez Bradshaw, who serves as his case manager.

“Breonna’s family has a right to the records,” Aguiar told CNN in a statement. He went on to say, he’s “tired of the administration playing their games when it comes to open records.”

As theGrio previously reported, Taylor died after police opened fire into her apartment after serving a “no-knock” search warrant on her home on March 13, 2020. Taylor died after being struck six times, but the officers involved were not charged for her death.

According to the lawsuit, two of the officers allegedly had a sort of body camera that turns on automatically, CBS News reports. The lawsuit also includes a list of other officers at the scene who wore the same kind of body camera.

“Simply put, it would have been difficult for most of the LMPD members with body cameras and who were associated with CID [Crime/Investigative Division] events at Breonna’s and/or Elliot Ave. on March 12/13, 2020 to not have had their Axon body cameras activated at one point or another,” part of the lawsuit reads, according to CBS News. 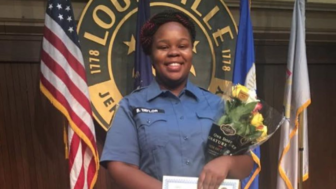 “Even those who may have left cameras in vehicles or other locations should have been activated to an event mode from a buffering mode, so long as the camera was within range of a Signal unit,” the lawsuit continues to state. “Similarly, LMPD members with body cameras who responded to the hospital, the CID building or other locations while near a Signal unit should have had the device activated.”

CNN previously reported that Louisville Mayor Greg Fischer said the killing of Taylor was not caught on video because the officers at the scene either were not wearing body cameras or didn’t turn their body cameras on.

Also Read:
Relatives remember Breonna Taylor to celebrate what would have been 28th birthday

Officials from Louisville Metro Police Department reportedly do not comment on pending litigation.

This lawsuit adds additional questions to the already troubling case. An internal report released by the Professional Standards Unit of the Louisville Police Department found the Kentucky officers should not have fired into the home of Taylor, theGrio previously reported.

“They took a total of thirty-two shots when the provided circumstances made it unsafe to take a single shot. This is how the wrong person was shot and killed,” Sgt. Andrew Meyer wrote in a report dated Dec. 4 and obtained by ABC News.

Meyer wrote that all three Louisville Police officers — Sgt. Jonathan Mattingly and now-former detectives Myles Cosgrove and Brett Hankison — violated use-of-force policies when they ignored “the significant risk of hitting someone who did not pose a threat.”

theGrio’s Biba Adams and Matthew Allen contributed to this report.