Osaka replied to Twitter-troll Kelly's response, but the tennis champ later deleted her "do better" message to the ex-newswoman.

Former network news figure Megyn Kelly is getting shamed after embracing her role as a Twitter troll, most recently underscored in her criticism of tennis star Naomi Osaka for her refusal to participate in post-match press conferences.

The ex-Fox News Channel anchor accused Osaka of blocking her on Twitter on Monday just hours after the tennis star responded to Kelly’s criticisms about her.

“Poor @naomiosaka blocked me while taking a shot at me (guess she’s only tough on the courts),” Kelly wrote in a tweet. “She is apparently arguing that she shot her many covers b/4 publicly claiming she was too socially anxious to deal w/press. Truth is she just doesn’t like Qs she can’t control. Admit it.”

Kelly originally critiqued Osaka for appearing on the covers of Vogue Japan, TIME and Sports Illustrated Swimsuit magazines after Osaka announced that she was going to be taking a break for her mental health.

Osaka replied to Kelly, but the tennis champ later deleted her tweet, which read: “Seeing as you’re a journalist I would’ve assumed you would take the time to research what the lead times are for magazines, if you did that you would’ve found out I shot all of my covers last year. Instead your first reaction is to hop on here and spew negativity, do better Megan.”

That gripe prompted a swift response from Black Twitter and allies from various advocacies.

Writer Kinsey Clarke noted, “this is the second time in a week that you’ve tried and failed to publicly antagonize a black woman doing her job. Seek help.”

“Your obsession with successful black women is weird but unsurprising,” Roxane Gay tweeted. “I hope you find a job soon.” 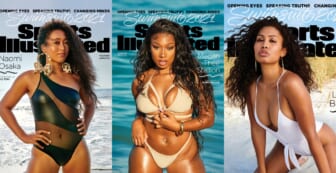 Kelly spent 2004 to 2017 at Fox News Channel, where for more than a decade she posited a number of controversial opinions, even authoritatively declaring that Santa Claus and Jesus were white — of which numerous commentators frequently remind her, often leaving Black Santa emojis under tweets.

She started hosting the third hour of the morning show Today on NBC with her program, Megyn Kelly Today, in September 2017. Her show came as the network sacrificed the time slot previously held by Tamron Hall in an attempt to court conservative viewers.

The program was cancelled in October 2018, and Kelly was released from her contract with several years remaining after she defended white people who choose to wear blackface on Halloween.