A new series about the childhood, presidential run, and White House terms of Barack Obama is coming to HBO in August

Warner Media announced a new three-part docuseries Obama: In Pursuit of a More Perfect Union in a press release this week. 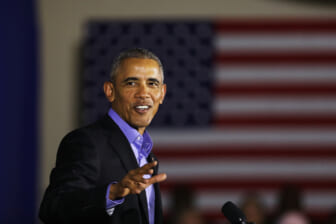 The series, which will chronicle the personal and political life of former President Barack Obama, will premiere on the HBO network for three consecutive days starting on Aug. 3 at 9 p.m. Part two and three will air on Wednesday, Aug. 4 and Thursday, Aug. 5, also at 9.

Piecing together a myriad of conversations from colleagues, friends, and critics — and adding news interviews and sit-downs with Obama himself — the documentary will detail Obama’s life from childhood to presidency.

One of the series’ main themes is the unique perspective of the politician: growing up in Hawaii as a biracial boy raised by his white mother from Kansas and an estranged Kenyan father, and how his upbringing shaped his racial identity. His story will be used to understand the complex struggles he endured while trying to appease demands from multiple people and situations throughout his life.

The series will also be available to stream on HBO Max. See the trailer below.

Per the press release, the documentary is described as a retrospective account of “America under its first Black president” that is both representative of Obama’s presidency within the confines of American history and how his position “exposed the ever-present need to address deeply entrenched challenges around race, racial justice, and our history.”

Obama made history in 2008 when he became the first Black person to be elected President of the United States, beating Republican candidate John McCain. He broke another boundary by getting re-elected in 2016.

Throughout his presidency, however, Obama faced a slew of obstacles from not just politicians but from the American public. This includes conspiracy theories questioning his American citizenship, and multiple critiques of his presidential style and his foreign and domestic policies.

In Nov. 2020, Obama released A Promised Land, the first of a two-part memoir where he recounted some of the barriers he faced. From things like opposition from the GOP to the insurmountable pressure from the public that comes with being the first Black anything —in his own words, he shared that his journey as the highest-ranking official of one of the most powerful nations was not the easiest.

He also wrote about his family life in the memoir, and how his wife, former first lady Michelle Obama was one of his strongest supporters before, during, and after his presidency, although she was initially averse to him running for president.

Each part of the upcoming docuseries will cover a pivotal part of Obama’s life.

Part one will hone in on his childhood, early schooling in Hawaii, and his time at Columbia University and Harvard Law School. Utilizing past interviews, Obama reflects on the effects of the relationship with his father, growing up in his multiracial identity and his relationship with the African American community in Chicago, where he worked as a community organizer.

Part two covers his presidential bid to his election to the White House, exploring the turbulence and triumphs along his campaign trail. Obama’s candidacy focused on advancing prosperity and unity for all Americans to create a more inclusive environment, which will be detailed in the series.

Part three looks at his White House years and the hurdles he faced trying to pass legislation in the divided Congress. One of the major successes during his presidency was the Affordable Care Act, which recently won a victory in the US Supreme Court. However, one of the most criticized parts of his tenure in the White House was the lack of action and conversation regarding highly publicized police brutality cases towards African Americans.

Obama: In Pursuit of a More Perfect Union was directed by Emmy-winning documentary filmmaker Peter Kunhardt, who directed other highly acclaimed political documentaries like John McCain: For Whom the Bell Tolls, JFK: In His Own Words, and Bobby: In His Own Words.