Morgan has repeatedly made comments about Black women in the public eye, from Biles to Meghan Markle

Piers Morgan is at it again. After attacking Simone Biles last week, the television personality is now congratulating the Olympic gymnast for her return, saying she “took his advice.” 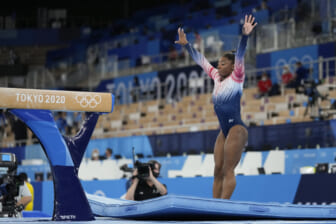 As TheGrio previously reported, last week Morgan yet again faced backlash after he publicly criticized Biles. After Biles very publicly withdrew herself from competing in the 2021 Tokyo Olympics and chose to put her “mind and body” first, Morgan wrote in a tweet, “Are ‘mental health issues’ now the go-to excuse for any poor performance in elite sport? What a joke. Just admit you did badly, made mistakes, and will strive to do better next time. Kids need strong role models, not this nonsense.”

While Morgan was slammed on Twitter for his comments and for yet again attacking a Black woman in the public eye, he is now taking credit for Biles’s return to the competition on Tuesday morning.

Last week, Morgan publicly called for Biles to return to the competition, writing in a tweet, “You can either listen to snowflake Twitter, @Simone_Biles – or listen to me. You’re a great champion, & great champions get back on their feet when they get knocked down. So, re-engage in these Games, win Gold, & inspire with the power of resilience not resignation. Go for it.”

Quoting that same tweet, as if Biles’s decision was based on Morgan’s unsolicited advice, Morgan wrote yesterday, “UPDATE: Simone has taken my advice and will compete in tomorrow’s Beam final. Good luck, Champ @Simone_Biles.”

As TheGrio previously reported, Twitter slammed the TV host after his unsolicited comments last week. Many called out Morgan for consistently attacking yet another Black woman, mere months after his negative comments on Meghan Markle, The Duchess of Sussex, and the fallout from her bombshell interview with Oprah Winfrey.

Journalist Nikki Bowers responded directly to Morgan, writing, “Oh, look you’re writing another column attacking another black woman. What else is new? To me, this is just another example of what a small shell of a man you are. It’s really sad and pathetic that you feel this is the only way to stay relevant. Grow up, get help & do better.”

As theGrio reported, Tuesday morning, Biles returned to the 2021 Olympics Tuesday morning and brought home a bronze medal during the balance beam final.

This medal marks her seventh, with Biles officially tied with Shannon Miller for most by an American in gymnastics.