Andre Drummond rescues son, 2, after he falls into backyard pool

Drummond tweeted a video of himself Thursday jumping into his family's pool after his toddler.

Philadelphia 76ers center Andre Drummond shared a video of himself jumping into his family’s pool after his 2-year-old son, Deon, fell in.

The toddler was sitting on the edge of the pool when he appeared to stand and fall into the water. His famous father runs and jumps in to retrieve him. In his Twitter post Thursday, Drummond captioned the video, which looks like it is from a security camera, “NOT ALL HEROS WEAR CAPES. A parents worst nightmare….. Feat my son & I.”

He added: “No one was harmed in this video.”

Several users remarked about the short period the toddler was in the water, which appeared to be only seconds.

One user replied, “Everyone’s missing the main point… He was a Dad in that Situation, & in the Heat of the Moment, he saved his child from a Bad Situation.”

“Something terrible can happen so quick and so easily even if you’re right there in the same room,” another added. “All it takes is one second. Good PSA for other parents to see as a reminder.”

Drummond signed up with the Sixers earlier this summer, and The U.S. Sun reported the center’s comments about the trade. “I think for me, making the decision to come to Philly,” he said, “is just based off really Doc (Rivers) having the faith in me to really help this team do something special, despite whatever my role is.” 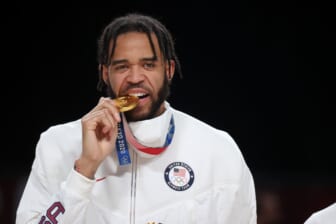 A native of Mount Vernon, NY, he is the father of two children, Deon and Aubrey. Both kids are 2 years old, and they have different mothers.

HealthyChildren.org notes that toddlers are attracted to water and lack the understanding that it can be dangerous. They note that “drowning is the leading cause of injury death in children 1-4. Young children can drown in as little as an inch or two of water, and it can happen quickly and silently.” 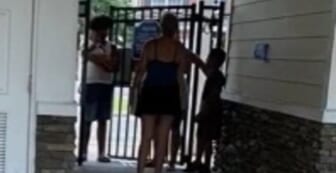 The website encourages families with small children to get a fence around their pool or to consider a pool alarm.

Another recommendation is assigning a “water watcher” during family activities near a pool “who will pay constant attention to children in the water.” The watcher is encouraged to put down their cell phone, avoid other activities, abstain from alcohol and supervise, even in scenarios where a lifeguard is present.

As for Drummond and young Deon, they both seem to be doing fine. Near the end of the short video, one can hear someone off-camera saying the toddler is smiling.