The documentary will detail the icons' meeting, cultivation of friendship, and unfortunate falling out

A new documentary focusing on the friendship and activism of Malcolm X and Muhammad Ali is coming to Netflix this fall.

Blood Brothers: Malcolm X & Muhammad Ali will chronicle the three-year friendship formed by the two legends. It will also uncover their eventual falling out.

The film promises to provide a fresh perspective into their relationship by hearing from those close to the two men and incorporating never-before-seen footage and images that trace the story. Interviews in the documentary include Malcolm X’s daughter Ilyasah Shabazz, Ali’s brother Rahman, and daughters Maryum and Hana — and cultural figures Cornel West and Al Sharpton.

The key points highlighted in the film are the initial meeting between Malcolm and Ali, their bonding, and eventual fallout as a result of discord within the leadership of the Nation of Islam, which they both belonged to at one point. 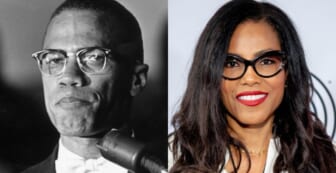 Per the book, Malcolm and Ali (then Cassius Clay) met in 1962. According to friends, Sam Saxon, a friend from Ali’s training camp, drove Ali and his younger brother, Rudolph to a Saviour’s Day rally in Chicago. The rally was an annual event hosted by the Nation of Islam. Saxton was already Muslim and knew Ali was in search of a spiritual foundation. Malcolm spoke at the rally and immediately mesmerized Ali and his brother.

“There was this confidence, this authority that Malcolm had at the podium that day,” Smith wrote, according to NPR, “and it made a profound impression on young Cassius Clay.” They began cultivating a friendship, with Malcolm acting as a father figure and mentor to Ali. One of Malcolm’s goals was to draw Ali into the religion to help attract more to the Nation. Ali initially kept his connection to the religion secret to protect his public image and career, but he eventually went public, proudly.

Cracks in their friendship began to show when Ali’s influence within the Nation began to rise. Malcolm also simultaneously began speaking out about the Nation’s leader, Elijah Muhammad, and his extramarital affairs and love children. Malcolm was suspended by Muhammad as a result and Ali turned his back on him, believing Malcolm was disloyal to the religion he committed himself to.

Malcolm was assassinated in 1965. His relationship with Ali was estranged until his death.

“One of Ali’s greatest regrets — and he said as much — is that he never patched things up with Malcolm, that he never told Malcolm how important he was to him,” Roberts wrote.