Several dozen people gathered for a rally in Civic Center Park in Kenosha, Wisconsin on Saturday to mark the first anniversary of the shooting of Jacob Blake by a white police officer.

Blake was shot seven times on Aug. 23, 2020 in front of his children and was left paralyzed as a result. Angry residents took to the streets of Kenosha in protest following the shooting.

At the rally, Blake’s father, Jacob Blake, Sr., took to the stage to speak to supporters.

“We must seek a justice system that is just for all,” he said. “The lady holding that scale has a blindfold on. But when it comes to us, she doesn’t have a blindfold on. So if we don’t get equal justice in the community, then we get nothing. We’re not asking, we’re demanding, that all Brown people are treated as our Caucasian counterparts.”

Tanya McLean, the executive director of Leaders of Kenosha, a non-profit organization, told The Milwaukee Journal Sentinel her group has put on more than 70 events in the past year to bring justice to Blake.

In July 2020, a warrant was issued for Blake’s arrest on charges of third-degree sexual assault, criminal trespass and disorderly conduct. Last Aug. 23, the woman who filed the complaint that led to those charges called 911 to report he was at her home.

Officer Rusten Sheskey was one of the responding cops, and he fired at Blake as he turned to get back in his vehicle. Three of Blake’s children were in the backseat of his car. 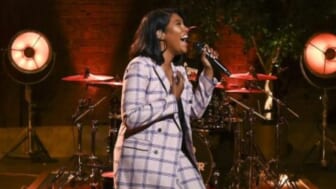 Sheskey claimed self-defense and has since been reinstated and is back on patrol in Kenosha. Blake and his family filed a federal civil rights lawsuit against him alleging excessive force.

As previously reported, Sheskey is the only defendant in the lawsuit in which the 18-page complaint alleges that the officer put Blake’s children in imminent danger. He alleges that Sheskey’s actions were “undertaken with malice, willfulness, and reckless indifference to (Blake’s) rights.”

The shooting occurred just months after the Minneapolis police murder of George Floyd and during a summer of national protests against violence by law enforcement. Protests lasted for several nights in Kenosha following Blake’s shooting.

In a statement issued early Monday, Wisconsin Governor Tony Evers wrote, “One year ago today, Jacob Blake’s life was forever changed. While we are grateful Jacob survived his injuries, we also know Jacob, his kids, and his family have and will face challenges they never imagined having to endure.”

He took time to mention the two men shot and killed by Kyle Rittenhouse during protests in Kenosha.

“We also know the families and friends of Joseph Rosenbaum and Anthony Huber are undoubtedly grieving and mourning the loss of these young men this week,” Evers noted. “Kathy and I are thinking of Jacob and his loved ones, as well as the families and friends of Joseph and Anthony today, and we ask Wisconsinites to join us in extending our prayers for peace and healing.”

Blake attended virtually from his home, where he is still rehabilitating.