The clip shows a male friend of the woman jump in and then the trio throw punches at one another.

Pittsburgh police have launched an investigation into a fight that broke out after a white woman slapped a Black man during an argument at the Steelers’ first home game of the preseason.

The incident occurred at Saturday night’s Steelers-Lions game at Heinz Field, the Post-Gazette reports. The video doesn’t show what ignited the argument, but the clip shows a man and woman exchanging heated words, with her yelling “You can get the f— out,” while pointing toward the exit row.

The viral clip, which was captured by a spectator, shows another man seated next to the woman jump in and then all three fans throw punches at one another. According to the report, no one was seriously injured.

Stadium security ultimately intervenes, and someone in the background is heard yelling, “She hit him first.”

The video stops and it is unclear if anyone was ejected from the game, per the report.

Police have not yet released any details about the fracas or what, if any, charges are pending, but noted that they “are aware of the incident that occurred in Heinz Field” and “are actively working with Heinz Field Security on the matter.”

Twitter users are weighing in on the brawl, with many noting that the Black man appears to “punch” the woman first. One user wrote, “He pushed her first. Take it frame by frame. I want to know what it was all about in the first place!”

Another responded, “She was getting in his face and he just stuck his arm out to keep the space… did not push her first…”

A third said, “He did not hit her first. She reach out to touch him and he told her don’t touch me and she slapped him.”

One user noted, “No he did not push her she was all in his face as he raised his hand she went back thinking he was going to hit her, her reflex and smacked him and he hit her back you can’t do that respect someone space she was wrong from the start you get what you receive when your asking for.”

Another commented, “I never understand how people just sit and watch someone get bullied and assaulted but only step in the moment the non aggressor stands up for themselves. Good for him. Less trauma to carry around by not turning the other cheek. FTB!”

“Yeah she thought she could get in his face, disrespect him and then slap him? He BLOCKED her and told her not 2 touch him. She then slapped him & Bro PROTECTED&DEFENDED himself. They assaulted him , now they should’ve known better, she got her man hurt with her games,” wrote user Cheryl G.

The Steelers confirmed Saturday that they are working with investigators regarding the incident. 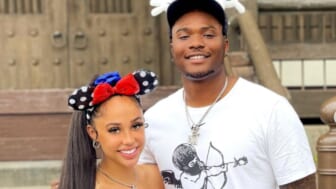 “We are working with local authorities and Heinz Field staff to gather more information and identify the individuals involved,” the Steelers said in a statement. “This kind of conduct is inexcusable and we will respond accordingly once more information is obtained.”

Police are asking anyone with information about the violent incident to call 412-323-7800.