Aaliyah’s ‘One In A Million’ celebrates 25 years of innovation

When Aaliyah Haughton entered the studio in the mid-90s to work with the Virginia Beach production and songwriting team of Timothy “Timbaland” Mosley and Missy “Misdemeanor” Elliott, she was already the new darling of R&B thanks to her 1994 debut, Age Ain’t Nothing But a Number.

Although she achieved success with hit records like “Back and Forth,” and “(At Your Best) You Are Love,” her image and sound had been heavily influenced by the album’s sole producer, R. Kelly, who had established his own sound with his own two previous albums, and songs and production work he did for others.

Haughton, still a teenager, would eventually develop her own sound and identity on her sophomore effort, and in turn, would open a new pathway to R&B that nobody saw coming. And sadly, almost exactly five years later, another impactful moment that couldn’t be predicted occurred — her tragic passing.

One In A Million was released 25 years ago today and was, in essence, the reintroduction of Aaliyah to her growing audience. Her sinuous vocals and slick, yet endearing, mystique stood out in the world of R&B at the time.

1996 was the portal to the next Black music evolution. It signaled the apex of hip-hop; the nexus in which creativity and innovation and commercial viability had met in the middle.

The sound of New Jack Swing had been phased out by a smoother, more relaxed approach that emphasized mid-tempo grooves and vibes in favor of driving cuts for the dance floor.

Keith Sweat’s “Twisted” and “Nobody” were forcing pop charts to come to him. Bad Boy Records was taking the radio hostage with groups like Total, Faith Evans and Atlanta hip-hop production squad Organized Noize was infiltrating R&B with hits for TLC (“Waterfalls”) and En Vogue (“Don’t Let Go”).

Aaliyah made a big splash with her debut album, but without Kelly at the helm, and due to the scandal of their marriage, her career was in crisis. But help was on the way in the form of Timbaland and Missy, proteges of Jodeci member/producer DeVante Swing.

Though there were multiple producers on the project including Kay Gee from Naughty By Nature, Jermaine Dupri, Darryl Simmons, and more, it was Missy and Timbaland who wrote and produced eight of the 17 tracks and were credited with giving the album its musical focus.

Their approach to producing and songwriting was unlike anything before it. It is safe to say that the two are among the last true originals is Black music. The influence of Timbaland’s drum programming and quirky, futuristic arrangements can hardly be traced back to another era or genre.

From the intro, “Beats 4 Da Streets,” where Missy calls out Aaliyah’s name telling her to wake up, you realize it’s the sign that she’s ready to break away from the confines of trending R&B to a new paradigm.

The way Timbaland uses phone tones and static as instrumental elements over his scattershot drums signaled a new dawn in R&B and pop production.

Fans got their first glimpse of the new Aaliyah with the lead single, “If Your Girl Only Knew,” a Missy/Timbaland production that went #1 on the R&B/Hip-Hop charts, ultimately selling over 600,000 singles. Transitioning out of the baggy, sagging jeans and bandanas of her debut album, Aaliyah was forging a new image — a more clever blending of hip-hop edge and femininity.

She was now donning leather crop tops and wearing more makeup while keeping her signature sunglasses. Later she would droop her hair over one eye, relying on mystique and mystery to draw fans nearer.

Musically, the gurgling, dynamic bass line fused with the ominous organs and stalking rhythm guitar provided a brooding canvas for Aaliyah to deliver Elliott’s tale of an unfaithful man. She unleashed a lilting falsetto as part of her arsenal which further added to the darkness of the song.

It was that same darkness that was inexplicably used to successfully affect the carnal heat of “Hot Like Fire,” and the yearnful of “4 Page Letter.” Only this time, the murky melodies and backward guitar licks played up to Aaliyah’s plea to a man her loved ones cautioned her about, with the high octave background harmonies increasing the sense of innocent mischief, curiosity and desire. 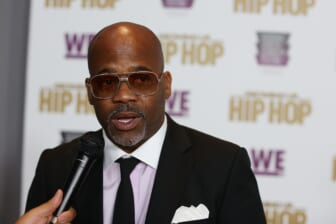 Sandwiched between Timbaland and Missy’s cutting-edge material were songs that fit Aaliyah like a glove. As an encore of her cover of The Isley Brothers’ “(At Your Best) You Are Love,” she turned up the sexy with their 1983 hit “Choosey Lover.” She showcased her fun-loving side with a hip-hop reboot of Marvin Gaye’s “Got To Give It Up,” featuring some old-school rap flavor from Slick Rick.

The low-key dance track “Everything’s Gonna Be Alright” is one the earliest song placements for songwriter/producer Rodney Jerkins. The slick, funky bridge and elastic beat would end up being an appetizer for all that he would do soon after.

While the album was steeped in the R&B and hip-hop aesthetics and attitude, Aaliyah was still able to stretch out her emotive palette on Diane Warren’s “The One I Gave My Heart To.”

Never before had Aaliyah sounded so vulnerable, so mature.

Then there’s the title track. The minimalism of Aaliyah’s breathy refrains of “love me, baby, love me, baby,” the wall of vocals on Elliott’s instantly unforgettable chorus, with the ferocious double-time kick drum patterns topped by tightly swirling snares, was a sound rarely heard before.

The impact of One In A Million was immediate and long lasting. “If Your Girl Only Knew” and the title track were number one R&B smashes, while “The One I Gave My Heart To” cracked the Top 10 on the Billboard Hot 100.

Aside from the chart and airplay success, the sound of the album inspired so many other producers and artists.

Timbaland’s double-time beats were heard in Something For The People’s “My Love is the Shhhh,”; Jerkins, who became known as Darkchild, was able to build on his signature, slickly produced sound with Mary J. Blige’s “I Can Love You,” and later, Jennifer Lopez’s “If You Had My Love,” Brandy and Monica’s “The Boy Is Mine,” and Michael Jackson‘s “Rock My World.”

One In A Million also introduced Timbaland and Missy to the mainstream. Had it not been for this album, the world would not have been ready the next year for Missy’s debut, Supa Dupa Fly. Ginuwine wouldn’t have cracked the pop charts with “Pony” and Jay-Z might not have been propelled into the stratosphere thanks to beats like “Jigga What, Jigga Who,” “Big Pimpin’,” and “Is That Your Chick.”

Whenever you see artists like Normani, SZA, Ciara, or Jhené Aiko, you will notice Aaliyah’s shadow not far behind. Whether through samples, production or wardrobe choices, Aaliyah’s innovative combination of street meets elegance meets mystery, still endures.