EXCLUSIVE: Law enforcement agencies are looking into the matter that left classes canceled and students on campus without Wi-Fi

Howard University officials along with leading cyber experts are trying to assess what has been compromised in an active ransomware, cyberattack on the HBCU campus. Officials have deemed the attack criminal.

The prestigious Black university in Washington, D.C. issued a statement to students that “the service disruption was caused by a ransomware cyberattack against the university.”

Classes have been canceled for Tuesday and Wednesday at the institution that boasts several alumni who are dignitaries from all sectors including Vice President Kamala Harris. Students have been notified that online and hybrid classes will remain canceled and only essential staff is allowed on campus. However, all in-person undergraduate, graduate, professional, and clinical experiential courses will resume as scheduled on Wednesday. 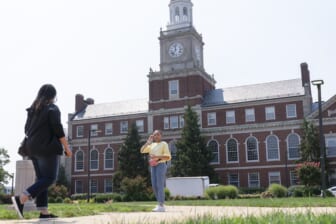 Officials at Howard University are calling this a “moment to moment” situation as they address the cyberattack and continue to keep the community updated. TheGrio can confirm through sources that government officials and law enforcement agencies are investigating the matter.

A cyber security expert who wishes not to be identified told theGrio that ransomware attacks hold “personal identifiable information (PII) hostage for money.” PII data include social security information, birthdates and credit cards that are used by cyber criminals to execute identity theft. The expert contends hackers resell the personal data on the dark web after they shut down a system to force the victim to pay a ransom.

A ransomware attack is as simple as opening an unintended link, like an email which can take the identity of a person you know. To be skillful in their approach, hackers are said to target human behaviors instead of computers. People are encouraged to use different passwords on all accounts and avoid clicking suspicious links.

The expert says cyberattacks are at a level of sophistication that can even create phoney students for online classes and bolster the rosters despite the person not even showing up in class nor existing.

TheGrio spoke with HBCU presidents who wish to maintain anonymity to avoid being targeted by hackers. They expressed fears that the increase in large donations to HBCUs has heightened the risk for attacks on the campus cyber grids.

Students during the Howard University 2021 fall semester are learning both online and virtually. Some programs have recently shifted to online sessions. Hybrid learning this semester is not specifically a result of COVID-19 but partially a way to accommodate the new modes of learning.

University officials could not speak to theGrio as this is an ongoing investigation. However, Emerson Daniel, a Howard University junior is frustrated with this attack.

“Obviously it is unexpected,” said Daniel. “Given the current climate we are in and the state of the nation it is not completely shocking.”

This cyberattack comes just weeks after President Joe Biden invited a delegation of HBCU representatives and Black technology experts to come to the table to discuss cyber security attacks, which is considered the biggest threat to the United States. Coincidentally, this week is also National HBCU Week at the White House. At the end of the week, a high-ranking White House official is expected to travel to Hampton University to highlight HBCUs and STEM education.

There have been many calls over the years to get Black people engaged and employed in this industry that would work to prevent what happened at Howard.

Carmen Walters, the president of Tougalou College, told theGrio, “all of our HBCUs understand the need for this and are preparing our students to be able to take their rightful place in this industry.”

On the campus of Howard University, students tell theGrio that due to the security breach, Wi-Fi on the campus has also been shut down, much to the displeasure of students. The ordeal has left young scholars idle on the campus with nothing to do until the university gets in control of the cyberattack and its ramifications.

“I’m just concerned about all our information being safe and secure because Howard literally has all of our information — and a lot our money,” freshman student Amir O’Neil told theGrio.

“We haven’t been able to have classes for three days,” said student Iyanuolwa Awomuse.

Awomuse told theGrio that after a “hectic” first two weeks of classes, the current stall on campus gives students “an opportunity to calm down,” but added, “We are worried about the security of the school, so we hope it can be resolved as soon as possible.”