EXCLUSIVE: Noelle Borders is determined to keep her mother's story alive and carry on her legacy of perseverance in the face of one of the world's greatest tragedies.

If a picture is worth a thousand words, the striking 2001 photograph of 9/11 survivor Marcy Borders — covered in dust from the falling debris of the collapsing Twin Towers in New York City — has become a symbol of the collective trauma of that day, leaving thousands dead and millions heartbroken from what remains America’s deadliest terrorist attack.

The photo, captured by then Agence France-Presse photographer Stan Honda, is so haunting that it is considered one of the most iconic images of 9/11.

Borders, then a 28-year-old Bank of America employee just a few weeks on the job, had barely escaped the 81st floor of World Trade Center’s North Tower alive. And while her story of survival was miraculous, Borders revealed in interviews years later that the traumatic experience left her unable to cope with its aftermath; so much so that she struggled with alcohol and drugs throughout the years and at one point even loss custody of her young son.

Eventually Borders checked into a rehabilitation facility, turned her life around and regained custody of her child. But while she was able to turn her story of trauma into one of triumph, the New Jersey mom unfortunately died of stomach cancer in 2015 at the age of 42.

Borders’s daughter, Noelle Borders, who was just 8 years old at the time of the attacks, tells theGrio that she is determined to keep her mother’s story alive and carry on her legacy of perseverance in the face of one of the world’s greatest tragedies. Noelle, now a 28-year-old elementary history teacher in Bayonne, New Jersey, says she remembers 9/11 quite vividly.

“I remember my third grade teacher would roll in the TV cart to show us current events on the news, and while doing that, I guess the display of what was taking place on the screen — she wound up turning the screen off,” Borders recalls during a recent interview with theGrio. 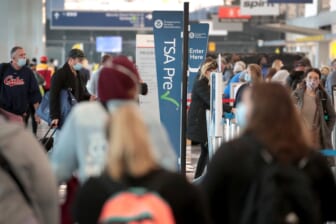 Soon after, students were being picked up from school one by one, but Noelle’s mom, who was head of the Parent-Teachers Association, never showed. “I wind up being like one of the very last kids to leave the classroom,” she remembers.

Eventually, Noelle’s aunt picked her up from school and took her home. At the time, her family did not know whether Marcy Borders was dead or alive. “I remember just the adults at home being very standoffish. They really didn’t want to talk around me. They didn’t want to let me know what was taking place. They didn’t want me to be upset. So any conversation that they had, they took it outside,” she says.

Despite fears for the worst, Noelle’s family was relieved to discover that Marcy Borders had indeed survived the attack. She was able to get to a phone booth and call home to let them know that she was OK. But while she had physically survived the horrors of that tragic day in history, Marcy Borders would spend several years struggling to feel safe and find peace of mind.

“She got into like a shell shock. She was very afraid. She didn’t want a lot of people around. Even people that we were familiar with that she knew wouldn’t hurt her,” Noelle recalls.

It also didn’t help that Marcy Borders’ picture, covered in dust from the debris, was plastered all over the news. Her photograph was so widely distributed that she had been nicknamed “The Dust Lady.” The image, Noelle says, became a triggering one for her mother, who felt like the public attention would soon make her a target of another attack.

Noelle says she remembers a time when she begged her mother to take her to a town parade just days after an anniversary of 9/11. While at the parade, however, a plane could be heard flying low above the crowd.

“She heard that noise and began to panic. At this point, the streets are flooded with people from our town. She grabbed my hand and me and her are the only two people running away from the plane sound. And then eventually she just stopped” after realizing she was actually safe from harms way, Noelle says.

Every year during the anniversary of 9/11, the infamous photo of Marcy Borders covered in dust often triggered her mother, Noelle tells theGrio. Taking on the feelings of her mom, who she described as her “best friend,” she too, would become emotional whenever she would see the harrowing photo. People would often show Noelle the picture in school and ask her about it.

“I was very overwhelmed. Like I felt like somebody should have been like, all right, leave her alone, or maybe just not even brought the picture to school,” she says.

Noelle says that while she witnessed firsthand how deeply traumatized her mother was by the events of 9/11, as a child she had no idea that her mother had struggled with alcohol and drugs to cope with her grief. “She never allowed me as her child to see that … everything that she did was in the dark and a lot of things that I found out was through interviews,” she shares.

“No matter how hurt she was, no matter how upset she was, protecting me was at the forefront of everything. So honestly, I was just as shocked as anybody else reading how she dealt with it and me not even noticing it as a child because she covered it up so well.”

Marcy Borders was eventually able to overcome her trauma and find peace with her experience inside the World Trade Center tower. Rather than thinking of herself as a victim in perpetual fear of another attack, she began to see herself as a survivor — someone who overcame it. Noelle says her mom eventually returned to the “full of life” personality that she was, and instead of hiding from her past she began speaking out about her experience with the press as a way to take back control of the narrative and inspire others. 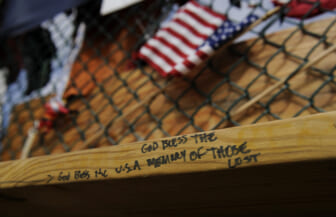 But sadly, Marcy Borders was met with more tragedy when she was diagnosed with stomach cancer. Noelle, who was 22 at the time, says she didn’t know what stage of cancer her mom was in. Her mom didn’t share the severity of her illness because she wanted Noelle, a college senior, to enjoy her final year of school.

Marcy was able to see her daughter graduate from college, but later that summer on Aug. 24, she lost her battle to cancer. Noelle says that the family was able to confirm that Marcy’s cancer was a result of the debris she breathed in during the 9/11 attack. According to a report from the Associated Press, nearly 24,000 people exposed to World Trade Center dust were diagnosed with cancer over the past two decades.

Noelle says her mission is to keep her mother’s story and memory alive for her younger brother, Zayden, 13 — who was only 7 years old at the time of their mother’s death — and her own son, Liam, who is 3.

“Hopefully one day she’s in his textbooks. And I just want [them] to know how it’s important just to keep her story alive, because not many Black or Brown people’s stories are out there who witnessed or have been through 9/11,” says Noelle. “I just want my son to know that him and my brother are the next in line of her legacy after me. And I want them to continue to be open enough to be able to talk about her story when they’re ready, because I know it took me some time to be ready to as well.”

As for the iconic photo that earned her mom the title “The Dust Lady,” Noelle wants people to be inspired by it and remember that “no matter what may be thrown their way, they’re able to overcome anything,” adding “the worst is not the end all be all — you’re going to overcome it.“

Noelle says that in an effort to continue telling her mother’s story, she plans to someday publish a book of her mother’s journals. “I’m just ready to pick up and finish what she wasn’t able to,” she says. “Where The Dust Lady stops, her daughter starts.”