Danielson had been with his friend Chandler Pappas and both were wearing Patriot Prayer hats, signifying their support of the right-wing group based in Vancouver

The estate of a man fatally shot in downtown Portland after a pro-Trump car rally last year is suing the city, the mayor and the county district attorney, saying their negligence contributed to his violent death.

The suit, filed Friday in federal court in Portland, contends a “hands-off approach” to political demonstrations and counter-protests in the city fostered a “culture of vigilante policing” between opposing factions that filled the void and led to the killing of Aaron “Jay” Danielson on Aug. 29, 2020.

“We are seeking justice for the preventable death of a young man, gunned down in a city with a dangerous and deadly hands-off approach to public safety,” Christopher Cauble, the estate’s attorney, said in a statement. “Time and time again, City leadership and law enforcement have failed to find an effective response to clashing groups of protesters.”

The Danielson estate also accused Multnomah County District Attorney Mike Schmidt of playing a role by broadcasting last summer that he had adopted a new policy and generally wouldn’t pursue what he considered public order crimes such as criminal mischief, interfering with an officer or a stand-alone riot charge, and instead would focus on deliberate property damage and threats of force or actual force against others. 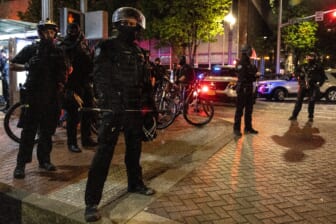 Residents protested police violence against people of color in cities around the country after the 2020 death of George Floyd, a Black man killed by a white officer in Minneapolis. In Portland, demonstrations were nearly nightly and led to complaints that authorities were heavy-handed in their use of force to control crowds.

Michael Reinoehl, a self-described anti-fascist who said he provided security for racial justice protests in Portland, appeared to have targeted Danielson, according to surveillance camera video of the shooting released by police. Reinoehl, 48, emerged from an alcove of a downtown parking garage before firing two gunshots as Danielson was walking in downtown after the rally, according to a police affidavit.

The suit says Danielson deployed bear spray at Reinoehl in response to the gunshots.

Danielson, 39, died from a single bullet to the upper right chest, an autopsy found.

Danielson had been with his friend Chandler Pappas and both were wearing Patriot Prayer hats, signifying their support of the right-wing group based in Vancouver.

Reinoehl was shot and killed days later outside a Washington apartment complex when officers from a multi-agency federal task force moved in to try to arrest him on a Multnomah County warrant charging him with second-degree murder and unlawful use of a firearm in Danielson’s fatal shooting.

The suit said that officers from the Rapid Response Team, the Police Bureau’s specialized crowd control unit, were less than a two-block radius from the shooting but were following orders not to get involved that day between dueling demonstrators.

“Given the enormity of the press coverage over the past several years regarding clashes between left- and right-leaning protest groups in the downtown core of Portland, Defendants knew or should have known that violent clashes would occur,” Cauble wrote in the suit.