‘Proud Family’ reboot will include cameos from Lizzo, Tiffany Haddish and more

Get ready to reunite with The Proud Family. The upcoming reboot is officially on its way, and Disney has announced the new iteration will feature star-studded cameos from Lizzo, Tiffany Haddish and more.

Thanks to Disney+, the beloved Disney Channel series The Proud Family is being enjoyed by old and new fans alike, and next year the show is set to return with new flair.

As theGrio previously reported, The Proud Family: Louder and Prouder will see the return of Kyla Pratt (Penny Proud), Tommy Davidson (Oscar Proud), Paula Jai Parker (Trudy Parker Proud), and Jo Marie Payton (Suga Mama) in a reboot that promises to pick up “the story of Penny, her madcap family, and loyal crew from the original series that ran from 2001 to 2005.”

Now, more information about the series has been released as it celebrates its 20th anniversary on Wednesday.

As theGrio previously reported, there are some new recurring roles in the series that were announced earlier this year as well, including Billy Porter and Zachary Quinto appearing as a gay couple and EJ Johnson as Michael Collins, Penny’s best friend and “non-conforming trendsetter.”

Keke Palmer also joins as new character Maya Leibowitz-Jenkins, who is described as a 14-year-old activist.

Executive Producers Bruce Smith and Ralph Farquhar shared in a statement obtained by theGrio, “In the beginning, we never envisioned that The Proud Family would still be relevant and revered 20 years later. We simply wanted to make an animated family show focused through a Black lens.

The response of joy, laughter and love by fans worldwide was and continues to be humbling. We are profoundly grateful and look forward to continuing the legacy with the next chapter, The Proud Family: Louder and Prouder, which premieres in 2022 on Disney+.” 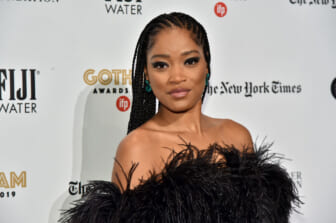 Disney also released an exclusive featurette celebrating the anniversary and giving a sneak preview of the reboot. Haddish reveals in the video, “I love The Proud Family. I’ve been watching it since it came out!”

Pratt also reflected on her journey playing lead Penny Proud, sharing, “I did The Proud Family when I was 14-years-old, and I didn’t realize the impact it had on me recording it, it was having that same impact on the people who were watching.”

Normani also opens up in the video about how she saw her own family reflected back to her in the show, saying, “I called my grandmother Sugar Mama, because it’s literally what my household looked like.”

Check out the exciting featurette below: