Reviewers have called "Expensive Pain" one of Mill's best works. It's the LP's colorful cover, by a Black woman artist, that's getting the big reactions.

Rapper Meek Mill is celebrating the success of his fifth studio album, Expensive Pain. The Philadelphia MC announced the LP, its cover art, and release date in mid-September, then he revealed the tracklist on Sept. 30, the day before its Oct. 1. drop.

While reviewers have called Expensive Pain one of Mill’s best works, it is the album’s colorful cover art that is getting him headlines.

A video of a white man in Los Angeles went viral when the rapper’s tour bus, which is wrapped with the cover art, drove through his Hollywood neighborhood. The cover art depicts imagery of naked Black women including exposed nipples and abstract versions of private parts.

It had been revealed via Mill’s social media almost a month prior.

“Is this what you want, Black women? Look at this sh*t,” the man yelled in video shared by TMZ Tuesday. “Is this how you want to be respected in life?”

The unidentified person then conflated his argument, espousing several conspiracy theories, including calling the checked floor on the artwork “Masonic” and ranting that people should “take your freaking mask off — learn about germ theory!”

However, he is not the only one who is critical of Expensive Pain‘s art.

“This album cover not cool bro, and then I seen a video with this album cover on a bus in some cities. Like bro ain’t no way this what you promoting in our neighborhoods,” a fan wrote earlier to Mill on Twitter this week.

“Now I just got wind of this new Meek Mill album cover and chile whet? It’s giving harmful and unnecessary imagery contributing to the continual degrading of Black women,” opined another.

However, supporters are pointing out that the cover art for Expensive Pain was created by Nina Chanel Abney, an African American artist based in New York. She creates contemporary art, boldly exploring race, gender, politics and pop society via her works painted on large canvasses. 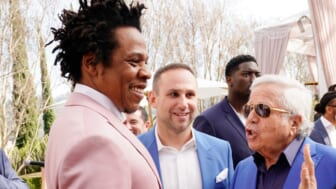 “Lemme get this straight Meek Mill recruited a black female artist to create his Album cover,” one supporter of the rapper tweeted. “She made the art he accepted it. And now Meek is the one y’all want to attack for the art  THAT THE BLACK WOMAN CREATED?”