Dr. James Whitfield wants to appeal the decision by the Grapeville Colleyville Independent School District to not renew his contract.

The first Black principal of Colleyville Heritage High School has asked for a hearing to appeal the decision by the Grapeville Colleyville Independent School District to not renew his contract, of which he was notified last month.

Dr. James Whitfield requested an open hearing in front of the school board on Monday via his attorney, David Henderson. The prospective date is Nov. 9, according to The Fort Worth Star-Telegram.

Whitfield was suspended in August after being accused of violating a law promoted by Gov. Greg Abbott following assertions made by former school board candidate Stetson Clark that Whitfield was teaching critical race theory, theGrio previously reported.

Clark said he became concerned by a letter Principal Whitfield sent home to students and parents this summer.

“In this letter, he promotes the conspiracy theory of systemic racism,” Clark said, according to The Dallas Star-Telegram. “He is encouraging the disruption and destruction of our districts.”

Whitfield was also criticized for sharing his opinion on the murder of George Floyd on social media. Of his detractors in his school district, he wrote on Facebook, “This group has a problem with essentially the core of who I am as an educator. I’m about stepping up for those that are experiencing injustice. … Every single kid that walks through those doors, I want them to feel loved, supported, welcomed and given all the opportunities to have a wonderful, equitable and excellent education. This group of people is not about that.”

He also posited that he had been the target of racial attacks after sharing anniversary photos of himself and his wife, who is white.

Whitfield believes that he is being targeted because of his race, which the Grapeville-Colleyville School District denies.

At a Sept. 20 school board meeting, Superintendent Robin Ryan and the school district’s human resources director listed lack of communication, email communications with an outside party, and accusations of hiding public records from discovery via email by deleting them from sent items and trash folders as some of the reasons for Whitfield’s contract non-renewal.

That meeting welcomed Whitfield to respond for a mere 60 seconds, which the district maintains was the same amount of time given to all speakers. 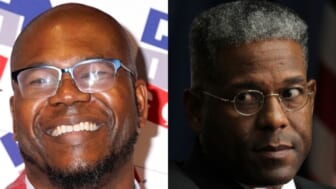 A parent, Mitchell Ryan, filed a suit against the school district claiming that he was repeatedly shut down at an August meeting as he criticized Whitfield, claiming he “has been and will be prohibited from addressing the board regarding Principal Whitfield’s efforts to promote critical theory at Colleyville Heritage High School.”

On Facebook, Whitfield, a longtime educator and parent himself, wrote, “I am not the CRT (Critical Race Theory) Boogeyman. I am the first African American to assume the role of Principal at my current school in its 25-year history, and I am keenly aware of how much fear this strikes in the hearts of a small minority who would much rather things go back to the way they used to be.”