A New Jersey man suspected of fatally shooting a U.S. Navy veteran during a carjacking was arrested in Florida, authorities announced on Thursday according to NJ.com.

Traynham was helping a woman unload groceries from her car on Chestnut Street Sept. 18 when Lewis allegedly shot Traynham and forcefully stole the woman’s car, officials said in the statement.

Paramedics transported Traynham to University Hospital in Newark, where he was pronounced dead at approximately 5 p.m., the prosecutor and chief said.

Lewis, who reportedly fled to Florida after the fatal carjacking, was later tracked down at a Winter Haven, Florida residence on Tuesday, officials said.

He is scheduled to be extradited from Florida, where he remains in custody, to New Jersey, according to the statement. 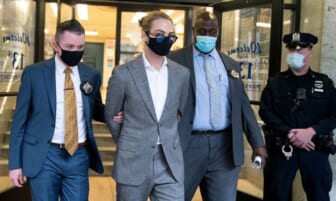 NJ.com reported that Trayham served with the Navy in an agency formerly named the Defense Investigative Service, now the Defense Security Service, where he assisted the Department of Defense with personnel security investigations. Most recently, he held jobs as a security specialist and chef for various hotels and restaurants around New York and New Jersey.

Traynham’s family released a statement saying the woman whose groceries he helped unload the day of the fatal shooting was his girlfriend and he died trying to protect her, per NJ.com.

He is survived by his parents, Elbert and Patricia Traynham, siblings Todd V. Traynam and Stacey L. Carpenter as well as nieces, nephews, other relatives and friends, according to his obituary.