EXCLUSIVE: TheGrio accompanied Vice President Kamala Harris on Air Force Two as she urged Virginians to turn out the vote for the key governor's race

Vice President Kamala Harris traveled down to Virginia on Friday to drum up support for former Democratic Governor Terry McAuliffe, who is seeking reelection after four years out of office. TheGrio accompanied the vice president on Air Force Two for her participation in the rally.

McAuliffe’s bid for the governor’s mansion in Virginia is seen by many as a litmus test for the future of the Democratic Party under President Joe Biden’s leadership. Although Virginia has been solidly blue since the election of Barack Obama as president, ahead of this upcoming Tuesday’s election, it is trending as too close to call as McAuliffe is neck and neck with his Republican challenger, Glenn Youngkin.

“Tuesday is a critical day that will determine whether we turn back the clock or move it forward,” Vice President Harris highlighted during her energetic remarks at the campaign event at the Peter G. Decker Half Moone Center in Norfolk, Virginia. “Virginia will determine what happens in 2022, 2024 and so on.”

The crowd of about 900 people cheered on the vice president during some of her most standout moments of the rally. “Don’t let Virginia be an experiment,” the vice president said as she highlighted that the nation is watching Virginia in the same vein it watched critical races in Texas. She added, “Who’s governor matters.”

Pharrell Williams, a native of Virginia and Grammy-winning musician, introduced the vice president to the stage and stumped for McAuliffe. The music superstar’s presence highlights the emphasis that the Democratic Party has placed on Black voters in Virginia. This is a trend that has prevailed in races of the past and present, both statewide and nationally.

Among campaign issues, education has been a focal point of public discussion across the country due to the debate pushed by conservatives on whether race and history should be censored or retold in indiscriminate detail in classrooms. In Virginia, critical race theory has spilled over into the campaign and become a hot button issue.

“Glenn Youngkin wants to create division by using dog whistles at every turn,” Scott said onstage at the McAuliffe rally. 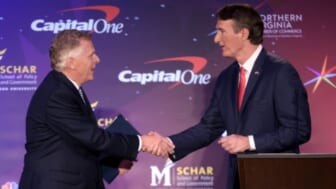 McAuliffe addressed his opponent’s targeting of Morrison, telling the crowd, “Why did he pick her out? Do you think that was a coincidence?”

Black voters in Virginia will also give an indication of enthusiasm to the national party leadership. The voter bloc came out in droves during 2020, but there have been concerns that attacks on voting rights, congressional fights about social spending and the failure to pass the George Floyd Justice in Policing Act could undercut the Democratic Party’s standing.

“I think they are moving a little slow,” said Denise Zimmerman, who voted for Terry McAuliffe during the early voting period. “But with the Republicans, the way that they are, we can only do but so much.”

Virginia is slightly unique since it is the only state in the South that has passed a voting rights act following Supreme Court rulings that have weakened federal voting rights protections under the Voting Rights Act of 1965. But the White House and Democratic machine are holding this race close to the vest.

“They’ve got so much going on with the Build Back Better plan. I think he’s trying to focus his attention on passing that and then hopefully, hopefully the voting rights would be implemented post haste as soon as this package passes.”

Overall, the sentiment of Black supporters in the room was optimistic both toward McAuliffe and the Biden-Harris Administration.

“In my heart, yes, I believe it,” Zimmerman said when asked if McAuliffe can win the tight race against Youngkin.