As Biden weighs payout to families separated at border, where are reparations for Black Americans?

OPINION: As the Biden administration weighs paying immigrant families separated by Trump's zero tolerance policy at the border, it begs the question if Black descendants of slavery will ever truly get reparations.

A child reaches through from the Mexican side of the U.S./Mexico border fence on June 24, 2018 in Sunland Park, New Mexico. The Trump administration’s ‘zero tolerance’ policy on immigration has created confusion for those seeking to immigrate to the United States. (Photo by Joe Raedle/Getty Images)

The Biden administration is considering paying reparations — I mean, settlements — of as much as $400,000 per victim to immigrant families who were separated by the Trump administration’s inhumane Zero Tolerance policy. This is extremely interesting especially when considered from an African-American lens. 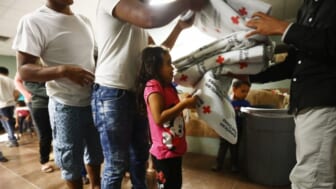 The separation of asylum seeking families was one of the worst things the Trump administration ever did. Over 1,000 families remain broken up to this day because of the United States’s actions. Families have been destroyed and lives have been changed. Black people know all about this government’s inhumane laws and policies destroying families and changing lives, but we’ll get to that I promise.

To lack sympathy for these people — to say well they shouldn’t have come here illegally — is to be heartless at worst and misinformed at best. These were asylum seekers with legitimate claims to immigration. The whole nature of America is to accept and embrace foreigners who need refuge. Also, these people are not being rewarded for immigrating, they’re being repaired for having their families destroyed. Once people are in law enforcement custody it’s the legal and moral responsibility of the authorities to treat them within certain boundaries. Separating children and families forever surely falls way outside of that.

That said, it’s pragmatic for the American government to try to settle lawsuits that could lead to payments that are far larger than half a million dollars. How much does a family deserve after a government has lost their baby? Those lawsuits could also lead to trials with dramatic and emotional testimony that’s deeply embarrassing for the United States and damaging to our image around the globe.

Now imagine this framework being applied to the larger problems that Black Americans have been dealing with throughout our lives — institutional racism. We have been irreparably harmed by slavery, segregation, redlining, housing loan discrimination, hiring discrimination, mass incarceration, and on and on.

The U.S. government, in the 1950s, gave out home loans to help create home owners. Over 95% of those loans went to white families, transferring wealth into the white community and out of the Black community. Black Americans have long thought of pursuing reparations on a moral basis or a legislative basis but what if there was a better road? What if we sued America?

What if we pushed America to defend its behavior over the past decades, a politically dangerous position, or just admit that it has been destructive to Black and brown people? What if America had to weigh the potential of having people testify to the long-term impact of slavery and had to worry about a court awarding Black people a multi-million or a billion-dollar judgement?

What if we could finally get reparations for the massive amount of wealth stolen from our community? What if we could have a public reckoning of what happened in slavery and how it still impacts us to this day? That could be an incredible moment in American history.