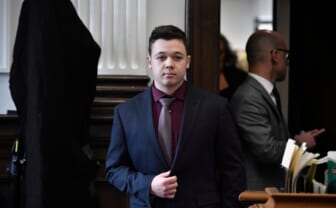 “I am happy that the judge saw fit and he followed the law, but I miss my baby and this just did not have to be,” Lamb’s mother, Laurie Bey, told reporters on Friday, per KMBC News.

DeValkenaere remains free on bond pending his sentencing, which Youngs declined to schedule on Friday, multiple news sites reported. The defendant could face up to four years in prison at sentencing, according to ABC News.

“What we sought in this case was a just outcome and that’s where we stand today,” Jackson County Prosecutor Jean Peters Baker told reporters after the verdict, per KCUR. “Today is justice, but there is no real victors in a case like this.”

DeValkenaere’s conviction came nearly two years after prosecutors said he shot and killed Lamb while the 26-year-old mechanic and father of three was sitting in a red pickup truck and backing it into the basement garage in his backyard on Dec. 3, 2019, according to the Kansas City Star.

During his trial, DeValkenaere told the court he and fellow detective Troy Schwalm responded to the scene at Lamb’s residence after a third detective informed them of a nearby high-speed chase involving a red pickup truck and a purple Mustang. 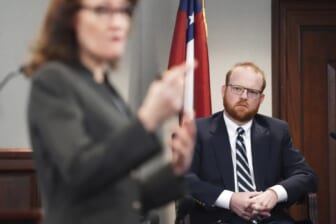 A police helicopter tracked the truck to Lamb’s residence near the intersection of 41st Street and College Avenue, DeValkenaere and his attorneys said. He and Schwalm, both in plainclothes, converged at the residence with their guns drawn as they headed to the back of the house where Lamb was parking the truck he was driving.

DeValkenaere testified during trial that he shot Lamb after seeing him wielding a gun. Prosecutors suggested Lamb’s gun was removed from his home and planted on him. along with multiple bullets, after he was shot, according to KCUR and the Kansas City Star.

DeValkenaere’s defense team argued that he was responding to a potentially dangerous situation and had probable cause to enter Lamb’s property. Prosecutors contended DeValkenaere acted recklessly by shooting Lamb within seconds of encountering him.

Youngs sided with the prosecution while determining the backyard area DeValkenaere and Schwalm entered was “within curtilage,” meaning they were apart of Lamb’s home and therefore the occupants who lived there “demonstrated a reasonable expectation of privacy.”

Lamb family attorney Lee Merritt called the verdict “momentous” and “historic” outside the courthouse on Friday.

“These instances of justice in our system are far too rare, but there was something that happened here that was different,” Merritt said, according to KCUR.