Silk Sonic’s ‘An Evening With Silk Sonic’ debuts at No. 2 on Billboard 200

Congratulations are in order for Silk Sonic, a supergroup created by Bruno Mars and Anderson .Paak. The duo has debuted at number two on the Billboard 200 chart with their first album, An Evening with Silk Sonic.

The album’s first week of sales garnered 104,000 equivalent album units earned, including 42,000 album sales in addition to seven of the album’s nine tracks currently on the Billboard Hot 100 singles charts. Their latest single, “Smoking Out the Window,” has reached number five after its second week on the charts. 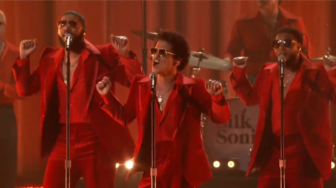 “Leave The Door Open” peaked at number one on the Billboard 100, while “Skate” plateaued to number 14.

Holding An Evening with Silk Sonic out of the number one position was Taylor Swift. Her new album, Red (Taylor’s Version), debuted at the top spot. Swift’s recording of her 2012 album Red earned 605,000 equivalent album units in its first week, while “All Too Well” is also the number one song on the Billboard Hot 100.

With big numbers from Silk Sonic and Swift, Summer Walker’s Still Over It album dips from number one to number four on the charts. It was her first number one Billboard 200 placement. 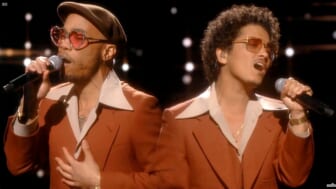 As for Paak, An Evening with Silk Sonic, marks the highest-charting album of his career. His 2019 solo album, Ventura, made it to number four on the Billboard 200. His 2018 album, Oxnard, made it to number 11, and his 2016 album, Malibu, was his first solo album to crack the Billboard 200, peaking at number 79. This also marks his second duo album to make the chart. In 2016, his group NxWorries, comprising himself and producer Knxwledge, peaked at number 59 with their first album, Yes Lawd!.

The Silk Sonic singles also find Paak in the unfamiliar place of being on the Billboard Hot 100. Prior to hooking up with Mars, Paak has never made the chart as a solo artist, although two of his singles, “Come Down” and “Tints” have been certified Gold. His lone placement on the chart prior to Silk Sonic was his collaboration on Eminem’s “Lock It Up,” which peaked at number 89.