Gabriel Hall was arrested in October for shooting Carlos Veliz Jr. in the head following an early morning verbal dispute

Gabriel Hall, brother of popular “Bachelor in Paradise” contestant Ivan Hall, was arrested on murder charges for his alleged involvement in an Aug. 31 shooting, per reports from TMZ.

The outlet reviewed legal documents showing Gabriel has been behind bars since October after police say he and another man, Carlos Veliz Jr., engaged in a verbal argument which ended with Gabriel fatally shooting Veliz in the head.

Per USWeekly, police identified Gabriel as the suspect shown in surveillance footage. He was driving an SUV while arguing with Veliz near the convenience store parking lot where his body was later found.

Gabriel was reportedly taken into custody after authorities matched a shirt he owned to the one in the surveillance video and gunshot residue was detected on his hands and gloves as well as in his rental car — an Eclipse Crossover that also matched the vehicle seen in the recording. 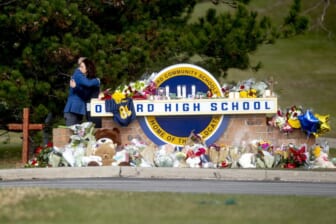 Ivan, 29, who starred on season 16 of “The Bachelorette,” reportedly opened up about his brother’s previous prison sentences during conversations with show lead Tayshia Adams about the wider context of systemic racism in America.

“Especially with George Floyd and police brutality, that’s something that really hit home for me,” Ivan divulged to Adams as the two discussed Gabriel’s past run-ins with law enforcement during a Nov. 2020 episode, USWeekly reported. “You can only imagine how much wilder it could be in prison.”

“My brother used to tell me stories about how these correctional officers, like, beat him up,” Ivan continued. “And I felt so bad because my first question was like, ‘Well, Gabe, what did you do?’ It doesn’t matter. No matter what George Floyd did either way, or what my brother did, these people have a job to do and they need to do it right. They can’t just be hurting people for no reason.”

According to USWeekly, Ivan and Adams formed a bond over discussing their feelings about the recent wave of Black Lives Matter protests, as well as their experiences navigating being Black in America.

“Honestly, it just inspired me more than anything. I never thought in my lifetime — our lifetime — that so many people would come together for one common cause,” Ivan said about the increase in national attention to prejudiced systems. “I really never thought that. … We’re both biracial, have Black dads, and we have this beautiful love story developing. This is just so big.”

Gabriel made a surprise appearance on the Bachelor following his release from a previous four-year sentence, which Ivan said “meant the world” to him and left him feeling “a range of emotions,” per USWeekly.

“It’s very special for me to have my brother here; he grew up by my side and knows me best. At the end of the day, he’s my best friend, so I’m very excited for Tayshia to meet him,” said Ivan, a California native who also starred on “Bachelor in Paradise.”

Gabriel said during a confessional on the Bachelor episode that he felt “revitalized” seeing Ivan who has “demonstrated his love” by helping “guide” him in life.

“I mean, everything you said, I could say the same about you,” Gabriel responded during the episode. “You’re my best friend, I look up to you. It’s just unfortunate that when I got dropped in the water, you guys had to learn how to ride the waves as well.”