By 9 a.m., a single lane of traffic was creeping forward between many stalled vehicles, while people could be seen walking down traffic lanes still covered with ice and snow

Road crews struggled to reach hundreds of motorists on Tuesday after they were stranded all night in freezing temperatures along a 50-mile stretch of Interstate 95 in Virginia where tractor-trailers jackknifed in the ice and snow, state police said.

Both directions of traffic on I-95 came to a standstill Monday between Ruther Glen, Virginia, in Caroline County and exit 152 in Dumfries, Prince William County, the Virginia Department of Transportation said. At around daybreak on Tuesday, the agency tweeted that “crews will start taking people off at any available interchange to get them.”

Gov. Ralph Northam said his team responded through the night, sending out emergency messages to connect stranded drivers with help, and working with local officials to set up warming shelters as needed. He said the National Guard was “available” but he hadn’t yet called upon members to help. He also couldn’t say when the situation would be resolved.

“Right now, things aren’t moving as you know and as you can see on the cameras,” Northam told radio station WTOP Tuesday morning. “We need to get the cars and the trucks off the roads. We need to keep people safe, and then we need to clear them.”

Crews were working to remove stopped trucks, plow snow, de-ice the roadway and guide stranded motorists to the nearest exits along the U.S. East Coast’s main north-south highway, the transportation agency said. By 9 a.m., a single lane of traffic was creeping forward between many stalled trucks and cars in one direction, while people could be seen walking down traffic lanes still covered with ice and snow.

“We know many travelers have been stuck on Interstate 95 in our region for extraordinary periods of time over the past 24 hours, in some cases since Monday morning. This is unprecedented, and we continue to steadily move stopped trucks to make progress toward restoring lanes. In addition to clearing the trucks, we are treating for snow and several inches of ice that has accumulated around them to ensure that when the lanes reopen, motorists can safely proceed to their destination,” said Marcie Parker, the agency’s Fredericksburg District engineer.

The impasse began when a tractor-trailer jackknifed in the ice and snow, causing a chain reaction of other commercial vehicles losing control and becoming disabled in the traffic lanes, state police spokeswoman Corinne Geller said Tuesday. As hours passed and night fell, motorists posted desperate messages on social media about running out of fuel, food and water. 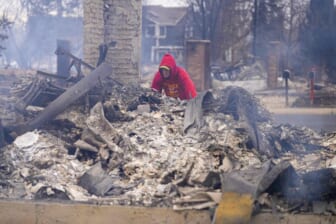 Between 7 to 11 inches of snow accumulated in the area during Monday’s blizzard, according to the National Weather Service, and state police had warned people to avoid driving unless absolutely necessary, especially as evening and freezing temperatures set in.

Thousands of accidents and stranded vehicles were reported throughout central and northern Virginia. As of 3:30 p.m. Monday, Virginia State Police said troopers had responded to more than 2,000 calls for service due to treacherous road conditions.

Compounding the challenges, traffic cameras went offline as much of central Virginia lost power in the storm, VDOT said. More than 281,000 customers remained without electricity on Tuesday, according to poweroutage.us.

“I’ve never seen anything like it,” Emily Clementson, a truck driver, told NBC Washington. She urged stuck motorists to ask truck drivers if they have food or water to share, since many carry extra supplies in case they get stranded.

The agency tweeted to the stranded drivers on Monday that reinforcements were arriving from other states to help get them moving again.

“We wish we had a timetable, ETA or an educated guess on when travel will resume on I-95. It’s at a standstill in our area with multiple incidents,” the tweet read. “Its frustrating & scary. Please know our crews don’t stop. Crews will work 24/7 until ALL state-maintained roads are safe for travel.”

U.S. Sen. Tim Kaine, who lives in Richmond, said he remained stuck in his car 21 hours after starting his two-hour commute to the Capitol at 1 p.m. on Monday. 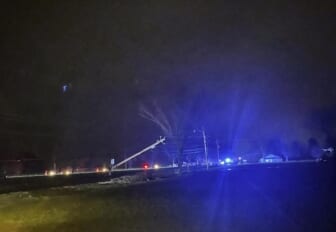 “This has been a miserable experience,” Kaine told WTOP. Traffic was so tightly packed that emergency vehicles struggled to remove disabled cars and trucks, he said.

Kaine described camaraderie among folks who were stranded, including a Connecticut family returning from a Florida vacation who walked up and down lines of parked cars sharing a bag of oranges they were bringing home.

Still, spending the overnight hours in frigid weather was “nervewracking,” he said.

Darryl Walter, 57, of Bethesda, Maryland, was stuck on I-95 in Virginia for 10 hours as he drove home from a Florida beach vacation with his wife, 26-year-old son and dog, Brisket. For roughly five of those hours, they turned off their car to preserve gas until northbound traffic started crawling again.

They had a few bottles of water, a couple bags of chips, a blanket for warmth and Trivial Pursuit to pass the time. Walter said the worst part of the ordeal was not knowing how long it would last.

“We didn’t see plows out there,” he said. “Snow removal has always been a joke in this area.”

Still, Walter feels fortunate that they were able to make it home as soon as they did knowing that many others remained stranded for much longer. They passed a long line of southbound cars that weren’t able to get past jack-knifed trucks. “It had to be 15 miles of backup,” Walter said.

Also stranded was NBC News correspondent Josh Lederman, who spoke on NBC’s “Today” show on Tuesday via video feed from his car, with a dog in the back seat. He said he’d been stuck about 30 miles (48 kilometers) south of Washington, D.C., since 8 p.m. Monday.

“We started to see a lot of drivers turning their cars off to conserve gas, people running out of food and water, kids and pets holed up for so many hours, people letting their pets out of the car to try to walk them on the street,” said Lederman, a former White House reporter for The Associated Press.

“And in the meantime, no signs of any emergency vehicles that we could see,” he said. “You really start to think if there was a medical emergency, someone that was out of gas and out of heat — you know it’s 26 degrees and there’s no way that anybody can get to you in this situation.”