“Truly a blessed day for our ancestors … and for children not yet born,” Keith Plessy says

Keith Plessy, Phoebe Ferguson and Kate Dillingham took a moment together earlier this week to contemplate their ancestors’ legacies after one of those ancestors was granted the first posthumous pardon in Louisiana state history.

The ceremony took place in New Orleans near the location where Plessy, a biracial shoemaker and civil rights activist, was arrested 130 years ago for refusing to leave the whites-only section of a railroad car in violation of the state’s Separate Car Act. 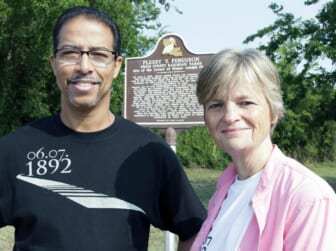 That 1890 law required white and Black Louisiana residents to have access to separate, but equal accommodations on trains. Plessy’s act of defiance that day set the table for the U.S. Supreme Court’s infamous “separate but equal” ruling in Plessy v. Ferguson, regarded by many legal scholars as one of the worst SCOTUS decisions in U.S. history.

“While this pardon has been a long time coming, we can all acknowledge this is a day that should have never had to happen,” Edwards told attendees at the signing ceremony.

Keith Plessy, whose great-great-grandfather was Homer Plessy’s first cousin, described the pardon ceremony as “truly a blessed day for our ancestors … and for children not yet born.”

“I’ve had the feeling that my feet are not touching the ground because my ancestors are carrying me,” he told attendees while speaking at the ceremony.

Phoebe Ferguson is the great-great-granddaughter of John Howard Ferguson, the Louisiana district court judge who was the first to uphold the state’s segregation law after Homer Plessy was arrested and charged.

She and Keith Plessy have known each other for years, according to CBS News.

“When I first met Keith, you know, just the reality of Ferguson meeting Plessy. I got some apologizing to do here,” Phoebe told the network on Wednesday. “It is this unjust criminal conviction that has brought us here today,” she added.

Kate Dillingham is the great-great-granddaughter of John Harlan, the former slaveowner and the only U.S. Supreme Court justice who ruled in Homer Plessy’s favor in 1896.

“It’s deeply moving, very emotional for me and my family,” Dillingham told CBS News of her feelings after Bel Edwards signed his pardon.

Dillingham’s ancestor is the judge who wrote the now-famous dissenting opinion in Plessy v. Ferguson.

“The arbitrary separation of citizens on the basis of race, while they are on a public highway, is a badge of servitude wholly inconsistent with the civil freedom and the equality before the law established by the Constitution,” Harlan wrote. “It cannot be justified upon any legal grounds.”

Keith Plessy described Harlan’s opinion as “words of magic to the legal community.”

“There is not a lawyer that you could talk to that’s not familiar with those words,” he said.

“I feel like they’re etched in stone, those words. You know, in my consciousness,” Dillingham added.