“I hear the anger in the face of discrimination," said Taubira

A progressive icon from the South American territory of French Guiana on Saturday joined the race for France’s presidential election in April, promising to push back against the “discourse of hate” that has stained the campaign and seeking to unite France’s long-fractured left wing.

Christiane Taubira has only marginal support in the polls but is admired by many for her work for social justice and for championing a French law that recognizes the slave trade as a crime against humanity. She last ran for president in 2002, the first Black woman to do so in France, and garnered just 2.3% of the vote.

“I want to play my part against … the discourse of hate and confront new challenges together,” she said in declaring her candidacy to supporters in the city of Lyon. “I hear the anger in the face of discrimination.”

Taubira, a former justice minister and former member of the European Parliament, is promising 800 euros ($913) a month to all young people for five years, a hike in the minimum wage and zero taxes on organic goods, among other measures. 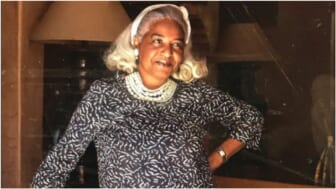 France’s presidential campaign ahead of the April 10 vote has been largely dominated by two figures on the far right: populist pundit Eric Zemmour and Marine Le Pen, the runner-up in the last vote in 2017, who have pushed immigration and security high up the agenda.

Zemmour faces a verdict Monday in a trial where he is accused of inciting racial hatred for calling underage migrants thieves, murderers and rapists.

French President Emmanuel Macron, a centrist, is widely expected to run for re-election and polls suggest he currently is the front-runner, though many voters remain undecided.

Taubira wants the once-powerful French left to join forces. But with several left-wing presidential candidates already running, her candidacy could further splinter it.