Ex-athlete vows to maintain U. of Michigan sex abuse protest

Jon Vaughn’s small blue-and-white camper has been parked outside the home of the University of Michigan’s president since early October, and he says it won’t be moving anytime soon.

The former star running back for the university’s Wolverines football team says a $490 million settlement the school recently announced is not enough by itself to remedy the sexual abuse he and more than 1,000 other students say they suffered at the hands of the university’s late sports doctor Robert Anderson.

“We’ve only really scratched the surface and touched the tip of the iceberg on how insidious this atrocity is,” Vaughn told The Associated Press on Friday. “That’s why I’m staying. The entire truth has not come out.”

Anderson has been accused of molesting students over more than three decades. He worked as director of the university’s Health Service and as a physician for football and other athletic teams from 1966 until his retirement in 2003. He died in 2008. 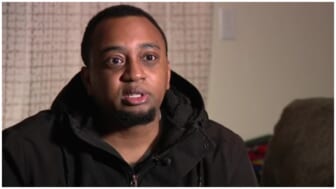 In 2018, a former athlete made an allegation of sexual abuse against Anderson and police launched an investigation. Then in early 2020, five more former patients lodged accusations against the late doctor. It was then that a spokesman acknowledged that some university employees were aware of accusations against the doctor even prior to 2018.

The university established a hotline in 2020 for other students to come forward.

Vaughn, who played for the Wolverines during the 1988-1990 seasons, said he was given 50 prostate exams by Anderson, the first when he was an 18-year-old freshman in 1988.

During the recruiting process, he said, football coaches knew his mother had been diagnosed with breast cancer and passed the information on to Anderson.

“He made the comment, ‘I see you had cancer in your family history,’” and asked, ”‘You have any other relative with cancer?’” Vaughn said. “In that exam, he then raped me digitally for the first time.”

Vaughn said Anderson, the only doctor whom scholarship athletes could see at the university, usually started his exams with noninvasive procedures such as taking his blood pressure and checking his heart.

As an athlete you go through exams “’cause you want to get the pass to play,” he said, noting that while at Michigan, he and other players “were in a constant state of being uncomfortable but learning to compartmentalize things to get the job done.”

Vaughn rushed for more than 1,400 yards in two years and nine touchdowns in his final season with the Wolverines. In 1990, he was picked by the New England Patriots in the fifth round of the draft. During a four-year NFL career, he also played for Kansas City and Seattle. 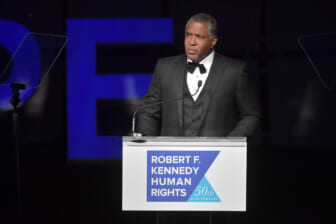 But he said the repercussions of what Anderson subjected him to lingered throughout his pro career and even seeped into his life outside football, namely when it came to taking care of his health.

“I’ve been living with this now for I don’t know how long,” he said Friday morning while heading to surgery to have his thyroid removed. “I realized how long I self-treated things.”

The allegations against Anderson are not the only scandal ensnaring the university. On Jan. 15, the university’s Board of Regents removed Mark Schlissel as school president because of an alleged “inappropriate relationship with a university employee.” Former University of Michigan President Mary Sue Coleman has been appointed interim president.

Despite his condition, Vaughn said he doesn’t plan to stop protesting the way the university handles sex abuse claims or demanding answers in the Anderson case.

“Michigan built us for this fight,” he said, referring to himself and other former players who say they were abused by Anderson. “They have no idea who we are.”