The NFL icon and his HBCU-athlete son showcase their strength in a friendly competition of household chores.

NFL legend and HBCU coach Deion Sanders has never been known to shy away from competition, so it’s no surprise that his latest Super Bowl commercial with son Shedeur features the pair engrossed in a friendly battle of strength.

Deion, 54, may be years removed from his Hall of Fame career, but he still appears to have enough “dad strength” to out-muscle Shedeur, 19, in a series of household tasks the father-son duo are shown performing in a recent advertisement for Oikos greek yogurt.

Shedeur, quarterback for Jackson State University under Deion’s coaching, is shown during the 30-second commercial trying to best his dad in chores including raking leaves, chopping wood and more.

“I’m getting dad’s strength, I just know it,” Shedeur says near the end of the ad as the two reflect on their day of work while eating cups of Oikos yogurt.

Deion responds: “How are you gonna have dad’s strength when I’m the dad?,” before his mother, Connie, steals the show with a surprise cameo.

“Strength?” Connie questions. “How do you think I gave birth to you and your big head?”

The ad, which will air during Super Bowl LVI on Feb. 13, is part of Oikos’ campaign “How Strong Do You Want To Be?” centered around the popular yogurt brand’s Oikos Triple Zero and Oikos Pro products, which respectively contain 15g and 20g of protein.

“Our new spot is anchored on the highly relatable human insight that all kids want to be stronger than their parents and all parents want to maintain their strength,” said Surbhi Martin, vice president of greek yogurt and functional nutrition for Oikos’ parent company Danone, per US Campaign.

“This creative mechanism of a father and son duo going head-to-head enables us to showcase the unique strengths and benefits of each product,” she added about the ad, which was created in partnership with Lightning Orchard. 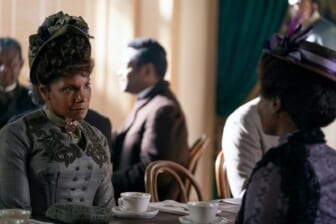 Also Read:
Audra McDonald on illuminating our history on ‘The Gilded Age’: ‘The Black elite did exist’

Strength certainly appears to run in the Sanders family — Deion won two Super Bowls during his 14-years as a pro, and has now embarked on a new career path coaching Shedeur, who recently became the first HBCU athlete to sign a name-image-likeness agreement with Gatorade.

In his role with Gatorade, the young QB will help to increase national exposure for HBCU programs and athletes during the multi-year partnership. As reported by theGrio, he said the deal will “definitely be helping other HBCUs.”

“This is about the numbers. It’s about to go crazy,” Shedeur said, adding that he and Gatorade are still ironing out the exact details of the contract.

You can catch Oikos’ new ad “Strong” featuring the star father-son duo airing on Peacock’s national live streams before halftime on Sunday, or on NBC in Boston, Charlotte, Cincinnati, Minneapolis and Pittsburgh.