The Black Police Precinct Courthouse and Museum hails the legacy of pioneering Black officers in the pre-civil rights era, starting in the 1940s.

The Black Police Precinct Courthouse and Museum collects information on Black officers in the pre-civil rights era, starting in the 1940s. Its website, for example, contains an interview with Clarence Dickson, the first Black graduate of Miami’s police academy, who, in 1985, became Miami’s first Black police chief.

But before he came, the men known as the “first five” became the department’s first Black patrolmen.

After the end of World War II, Black soldiers returned home, and that caused the population of Black areas of Miami, called the Central Negro District, to swell, according to the museum’s website. The city needed Black police officers to patrol the district and quietly started looking for recruits.

Clyde Lee, Moody Hall, Edward Kimball, John Milledge and Ralph White were all sworn in on Sept. 1, 1944. But their appointments reflected the prejudice of the day.

They went through six weeks of training in secret to not antagonize those who would be opposed to the idea of Black cops, according to the Department of Justice. They couldn’t carry guns and could only patrol in Overtown, a Black community. They couldn’t arrest white citizens. And since they were not part of the Civil Service, they received no benefits.

Milledge would become a terrible part of history in 1946: He was the first Black police officer killed in the line of duty in Dade County when he was shot in the back with a .22-caliber rifle. His killer ran and went free for 44 years until authorities received a tip and arrested the suspect. 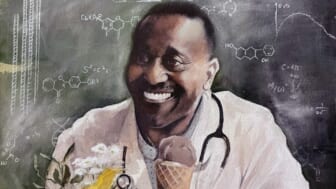 Leroy Strachan said he and his friends were trying to sneak into a football game, and he only meant to scare Milledge, but the gun went off. He fled to New York immediately afterward, where he became a church deacon in Harlem. After his capture, Strachan was sentenced to seven years ’ probation on a charge of manslaughter, in part, because Milledge’s family asked for leniency, according to a United Press International report.

“They weren’t bitter, they were grateful for their life journey, but they certainly talked about how hard it was being Black, especially at a place that didn’t accept you because of the color of your skin,” Cribbs-Lorrant said.

The museum goes far beyond the first five. It lists jailors, commanders and clerks who served at the courthouse and contains information on Black judges.

When speaking of the legacy of the first five, Florida International University Police Chief Delrish Moss put it best: “Those are big shoulders to stand on.”

“I use every day of my career,” he told WTVJ, “to live up to what they would have expected of me.”