Africans comprised almost one-fourth of the more than 80,000 foreign students who lived in the nation before Russia invaded.

Ukraine was one of the top destinations for medical study — including for tens of thousands of Africans — before the recent invasion by Russia forced millions to flee that war-torn nation. A new report from OkayAfrica explores how the current conflict in Ukraine has left those students’ maps uncharted.

According to OkayAfrica, Africans comprised almost one-fourth of the more than 80,000 foreign students who lived in the nation before Russia invaded.

Many explained that they chose to study in Ukraine because it offered a quality education, a good economy, plus gave them the chance to see more of the world. But Russia’s attack has now saddled them with trauma and left them unsure of what will happen next.

In addition to the fear that came from fleeing Ukraine before the military operation began, many African students found themselves facing blatant racism as they tried to escape.

Now the focus has turned to resettlement efforts. “There are groups of volunteers, including many members of the African diaspora helping them to find accommodation,” Special Mandate Holder at the United Nations Human Group of Experts on People of African Descent Miriam Ekiudoko, told OkayAfrica. “Lots of universities opened their dormitories, and many local governments have been very welcoming.”

Hampton University in Virginia is among those expected to welcome displaced co-eds needing more than shelter. The prestigious HBCU will provide free room, board and tuition to between 50 to 100 Ukranian and international students.

“The collective Hampton University faculty, staff and students are heart-broken because the war-torn country of Ukraine must deal with atrocities like the bombing of maternity wards, hospitals and other civilian areas,” Hampton University President Dr. William R. Harvey said in a press release.

“I think this partnership is something that can be beneficial to a great number of students and families.  My entire career has been focused on helping people to achieve and meet their goals.”

The offer is for the pending 2022 summer session, and its recipients have the option to stay at Hampton at its regular tuition and fees rates once it concludes. 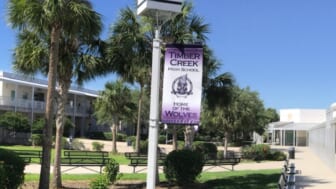 For students who may not be able to migrate to the U.S., other challenges remain, including helping them obtain their transcripts, find housing and gather the funds to pay for school in neighboring nations like Poland, Hungary and Germany.

As previously reported by theGrio, viral videos of Africans being turned away from convoys fleeing Ukraine sparked global condemnation as many rallied to support the democratic nation at the invasion’s outset. April Ryan wrote about members of Congress who were shocked and disturbed by the footage.

GoFundMe efforts were launched to help the hordes of students evacuate, including 4,000 from Nigeria alone.