The delay has allowed Georgia’s current Governor Brian Kemp to raise more than $2 million through his leadership committee.

Democratic gubernatorial candidate Stacey Abrams has filed a lawsuit to be able to take advantage of a new kind of Georgia fundraising committee, called a leadership committee.

If the court rules in her favor, Abrams would be eligible to accept unlimited donations from certain groups and people, as opposed to direct giving which is limited to $7,600 apiece for the primary and general elections, and $4,500 for any runoff election, according to The Guardian.

The delay has allowed Georgia’s current Governor Brian Kemp to raise more than $2 million through his leadership committee. Kemp and Abrams are facing off for a second time. She lost the race to him in 2018 when he was previously the Secretary of State in charge of Georgia’s elections.

Leadership committee fundraising is only available to the official candidate and Abrams has not been recognized as the official Democratic nominee for governor.

According to the report, Abrams’ team sought legal advice from Georgia’s attorney general, Chris Carr, and secretary of state, Brad Raffensperger, who have not provided clear guidance as to whether or not she is the official Democratic nominee—thus prompting the lawsuit. 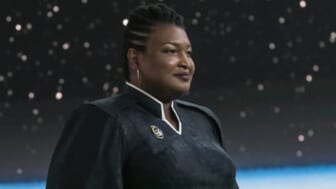 In the May Democratic primary, Abrams ran unopposed. Since write-in votes are not accepted, her team believes she is the de-facto nominee.

“Ms. Abrams – the sole qualified and declared Democratic candidate for Governor of Georgia – and her campaign committee will be unable to operate, control, chair, or otherwise use One Georgia, a leadership committee … to support her campaign without credible and justified threat and fear of legal proceedings being instituted against Plaintiffs,” the lawsuit said.

“As a direct consequence, Plaintiffs will suffer ongoing and irreparable injury to their ability to use political speech to advocate for Ms. Abrams’s campaign, especially compared to her chief opponent, sitting Governor Brian P Kemp.” 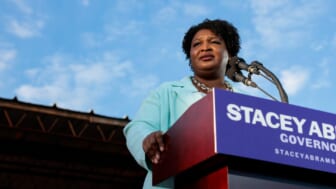 Also Read:
Stacey Abrams makes it plain: ‘I did the work, and now I want the job.’

In an affidavit, Williams said, “The only candidate who qualified with DPG [Democratic Party of Georgia] to run for the office of Governor of the State of Georgia prior to the end of the 2022 candidate qualifying period on March 11, 2022, is Stacey Y Abrams.”

In her lawsuit, Abrams alleges that her inability to use the leadership committee fundraising option is causing “severe harm” to the fairness of the election.