A performance by Grammy winner Mary J. Blige and D-Nice, hosted by comedian and actor Chris Tucker, guests from Hollywood – the star-studded event telegraphs Black excellence in a venue that amplifies theGrio's accomplishments.

Titled “A Seat at the Table: A Celebration of Black Media,” the reception will be held at the Smithsonian National Museum of African American History & Culture and will also celebrate theGrio’s historic accomplishment in Washington politics.

There are 49 chairs in the White House briefing room, and theGrio is the only Black-owned media outlet with an assigned seat. Ryan and theGrio colleague Gerren Keith Gaynor question spokespeople and national leaders from the fourth row.

On Saturday, actor, and comedian Chris Tucker will serve as host and the Grammy-winning artist Mary J. Blige will perform. In addition to theGrio owner and media mogul Byron Allen, those attending will include “members of the Congressional Black Caucus, singer Ronnie DeVoe, actress Vivica A. Fox, [and] theGrio contributors Touré, Panama Jackson, Natasha Alford and Michael Harriot,” according to a press release from Allen Media Group.

Joining Allen Media Group to sponsor the gala are Procter & Gamble, Nationwide, the Coca-Cola Co., the Ford Motor Co., and the NAACP, the press release states. 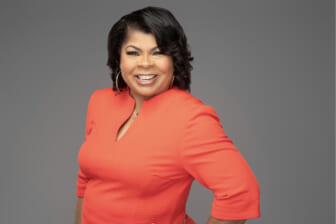 With so many recent historical firsts for Black women – the vice presidency, a confirmation to the Supreme Court, an extended mission on the International Space Station – the moment is perfect for honoring Ryan as the longest-serving Black female White House correspondent in a venue designed to showcase Black history, accomplishments, and contributions. And if you were wondering what led to this moment, theGrio thinks the words of Maya Angelou’s “Phenomenal Woman” provide the best framework.

April Danielle Ryan, born 40 miles from the nation’s capital and empowered at HBCU Morgan State, embraces what became her destiny to be the eyes and ears of Black America.

News “was embedded in me,” theGrio’s Washington bureau chief told People magazine about her milestone of covering the White House for 25 years. She describes her parents as news junkies. They would “listen to the news in the morning, afternoon, in the car, in the evening,” she recalled. “When everybody was home, my father would watch Walter Cronkite.”

Just why my head’s not bowed

She’s resilient, confident, and fearless. “I heard the questions she was asking, and I thought, “I want her to work for me,” Allen, president of theGrio’s parent company, recently recounted to staff.

During a 2018 commencement speech at Bard College at Simon’s Rock in Massachusetts, Ryan told graduates, “Questions are good because you know what? When you ask questions, particularly in my business, sometimes it evokes change.”

And sometimes it stirs rage. That was the case earlier that year when then-President Donald Trump castigated Ryan and told her to “sit down” when she attempted to ask about voter suppression.

In an interview with theGrio, Ryan said there were “obvious and not so obvious” challenges to being a White House correspondent: “When I was told to ‘sit down,’ when I was told to ‘stop shaking my head’ – a grown woman who stands tall in her community treated like a child. Racism. Sexism. Any other ‘ism’ you want to name, and just trying to diminish a woman who asked questions about a community that they did not want to talk about. That’s the obvious.”

Trump later called her a “loser” and “nasty.” He is no longer in the White House press room. She is.

“It’s not what they call you. It’s what you answer to,” Ryan told Girl Chat hosts Loni Love and Jeannie Mai during an appearance on that show. “When you know who you are, you don’t have to worry about what they say.”

“Walking through Lafayette Park and going through those wrought iron gates and seeing the stark white building that was built by slaves, that is one of the most memorable experiences every day,” Ryan says about being in the briefing room.

“I’ve questioned five American presidents, [and] they’ve called me by name,” she says.

It’s in the click of my heels,
The bend of my hair,
The palm of my hand,
The need of my care

“I will never forget picking up the Sunday Washington Post and there in the style section seeing a picture of April teaching Vice President Al Gore how to do the electric slide aboard Air Force Two on their way back from a trip to Africa,” news and radio executive Jerry Lopes told theGrio earlier this year. Lopes, who died April 23, was the president of American Urban Radio Networks. He hired Ryan to cover the White House in 1977.

“April was always comfortable in her own skin [and] keeping it real,” Lopes said in that  interview.

And she still is. On theGrio’s morning editorial call, between quips about gas prices (she uses supreme), requests for prayer and her bold, unedited opinions, Ryan eschews jargon to reveal what policy means in real life.

“Some people think politics are so cerebral,” she said on Charlamagne the God’s The Breakfast Club, “the ‘thus,’ ‘thou art,’ ‘whereas,’  ‘therefore.’  Sometimes you gotta break it down to the breakdown.”

April Danielle Ryan, theGrio celebrates, honors, and appreciates you. You have always deserved a seat at the table, and we are privileged to pull out your chair.