A white man’s violent attack which injured a Black woman at a Jacksonville, Florida gas station this week has prompted calls for justice from local activists who say the attack was racially motivated.

The assailant, Kevin Troy Williamson, was arrested this week, according to News4JAX. Williamson can be seen in surveillance footage punching 23-year-old Rayme McCoy, who is Black, 10 times on May 16 after allegedly using racist language toward her, she told the outlet.

Video capturing the incident without sound shows the mustached man wearing a green shirt “punching McCoy in the face at least 10 times before he walks out of the store,” the outlet reported.

McCoy said that an “older white man” followed her into the gas station nearest to her home and began “ranting and raving” while using racist language. At one point, she said, he approached her and then said he had a gun in his car when she told him to back up.

“So at that point, I felt threatened,” McCoy told News4JAX. “He put his beers on the counter in front of my stuff and I slid them over and at that point, that’s when he started punching me in the face.”

“I was literally shocked,” she continued. “After the first hit, you can see my mouth drop. After actually seeing the video it’s just shocking to see there was other people there and nobody did anything.” 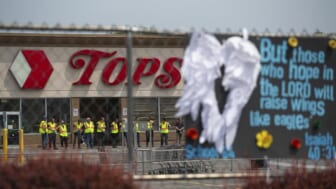 Also Read:
‘I wish I had a magic wand’: In Buffalo, wounds are deep 

Per reports, McCoy reported feeling dizziness post-attack and sustained “cuts and bruises on her face” which she had looked at by medical professionals.

“At least two witnesses to the incident were interviewed by police, a report shared by McCoy shows. We tried to contact them but they did not immediately return our calls. News4JAX also tried speaking with the people at the gas station but they didn’t want to comment,” the outlet reported.

Isiah Rumlin, president of the NAACP’s Jacksonville branch wrote in a statement to the outlet that the attack is “completely unacceptable and appears to be racially motivated,” adding, “there is absolutely no excuse for his behaviors.”

On Friday, before an arrest had been made, the New Black Panther Party for Self Defense urged the department “to immediately locate and arrest this perpetrator.”

“This attack was unjustified to say the least. Black people are increasingly under attack and we must send a strong statement,” the group wrote in its statement.

Williamson was arrested for battery on May 20 and his bond was set at just over $20,000.