Authorities in Somalia and neighboring countries work to prevent famine

Drought in Horn of Africa is the worst in four decades and is responsible for hundreds of deaths, particularly of children.

MOGADISHU, Somalia (AP) — No mother should have to lose her child. Owliyo Hassan Salaad has watched four die this year. A drought in the Horn of Africa has taken them, one by one.

Now she cradles her frail and squalling 3-year-old, Ali Osman, whom she carried on a 90-kilometer (55-mile) walk from her village to Somalia’s capital, desperate not to lose him too. Sitting on the floor of a malnutrition treatment center filled with anxious mothers, she can barely speak about the small bodies buried back home in soil too dry for planting.

Deaths have begun in the region’s most parched drought in four decades. Previously unreported data shared with The Associated Press show at least 448 deaths this year at malnutrition treatment centers in Somalia alone. Authorities in Somalia, Ethiopia and Kenya are now shifting to the grim task of trying to prevent famine.

Many more people are dying beyond the notice of authorities, like Salaad’s four children, all younger than 10. Some die in remote pastoral communities. Some die on treks in search of help. Some die even after reaching displacement camps, malnourished beyond aid.

“Definitely thousands” have died, the U.N. humanitarian coordinator for Somalia, Adam Abdelmoula, told reporters on Tuesday, though the data to support that is yet to come.

Salaad left behind another four children with her husband. They were too weak to make the journey to Mogadishu, she said. 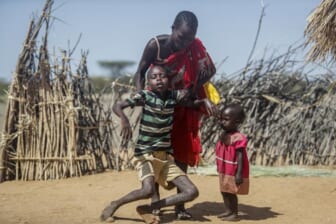 Drought comes and goes in the Horn of Africa, but this is one like no other. Humanitarian assistance has been sapped by global crises like the COVID-19 pandemic and now Russia’s war in Ukraine. Prices for staples like wheat and cooking oilare rising quickly, in some places by more than 100 percent. Millions of the livestock that provide families with milk, meat and wealth have died. Even the therapeutic food to treat hungry people like Salaad’s son is becoming more expensive and, in some places, might run out.

And for the first time, a fifth straight rainy season might fail.

An “explosion of child deaths” is coming to the Horn of Africa if the world focuses only on the war in Ukraine and doesn’t act now, UNICEF said Tuesday.

Famine even threatens Somalia’s capital as displacement camps on Mogadishu’s outskirts swell with exhausted new arrivals. Salaad and her son were turned away from a crowded hospital after arriving a week ago.

They were sent instead to the treatment center for the extremely malnourished where rooms are full, extra beds have been put out and yet some people must sleep on the floor. Mothers wince, and babies wail, as tiny bodies with sores and protruding ribs are gently checked for signs of recovery.

“The center is overwhelmed,” said Dr. Mustaf Yusuf, a physician there. Admissions more than doubled in May to 122 patients.

At least 30 people have died this year through April at the center and six other facilities run by Action Against Hunger, the humanitarian group said. It is seeing the highest admission rates to its hunger treatment centers since it began working in Somalia in 1992, with the number of severely malnourished children up 55 percent from last year.

More broadly, at least 448 people died this year at outpatient and in-patient malnutrition treatment centers across Somalia through April, according to data compiled by humanitarian groups and local authorities.

Aid workers warn the data is incomplete and the overall death toll from the drought remains elusive.

“We know from experience that mortality rises suddenly when all the conditions are in place — displacement, disease outbreaks, malnutrition — all of which we are currently seeing in Somalia,” said Biram Ndiaye, UNICEF Somalia’s chief of nutrition.

Mortality surveys conducted in parts of Somalia in December and again in April and May by the U.N.’s Food Security and Nutrition Analysis Unit showed a “severe and rapid deterioration within a very short time frame.” Most alarming was the Bay region in the south, where adult mortality nearly tripled, child mortality more than doubled and the rate of the most severe malnutrition tripled.

Deaths and acute malnutrition have reached “atypically high levels” in much of southern and central Somalia, and admissions of acutely malnourished children under 5 have risen by more than 40 percent compared with the same period last year, according to the Famine Early Warning Systems Network.

One notable complication in counting deaths is the extremist group al-Shabab, whose control over large parts of southern and central Somalia is a barrier to aid. Its harsh response to Somalia’s drought-driven famine from 2010-12 was a factor in more than a quarter-million deaths, half of them children.

Another factor was the international community’s slow response. “A drama without witnesses,” the U.N. humanitarian coordinator for Somalia said at the time.

More than 200,000 people in Somalia face “catastrophic hunger and starvation, a drastic increase from the 81,000 forecast in April,” a joint statement by U.N. agencies said Monday, noting that a humanitarian response plan for this year is just 18 percent funded.

Somalia isn’t alone. In Ethiopia’s drought-affected regions, the number of children treated for the most severe malnutrition — “a tip of the crisis” — jumped 27 percent in the first quarter of this year compared with last year, according to UNICEF. The increase was 71 percent in Kenya, where Doctors Without Borders reported at least 11 deaths in a single county’s malnutrition treatment program earlier this year.

Now the alarms are sounding again.

At one of the overflowing displacement camps on the outskirts of Mogadishu, recent arrivals were anguished as they described watching family members die.

“I left some of my children behind to care for those suffering,” said Amina Abdi Hassan, who came from a village in southern Somalia with her malnourished baby. They’re still hungry as aid runs dry, even in the capital.

“Many others are on the way,” she said.

Hawa Abdi Osman said she lost children to the drought. Emaciated, and weakened by another pregnancy, she walked five days to Mogadishu.

“We had to leave some of our relatives behind, and others perished as we watched,” said her cousin, Halima Ali Dhubow.

More people come to the camp every day, using the last wisps of energy to set up makeshift shelters in the dust, lashing together branches with fabric and plastic. Some walked up to 19 days to reach the capital, according to the Norwegian Refugee Council. 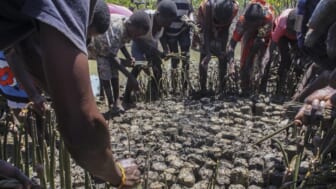 “Last night alone, 120 families came in,” camp manager Nadifa Hussein said. “We are giving them all the little supplies we have, like bread. The number of people is so overwhelming that helping them is beyond our capacity. In the past aid agencies helped, but now aid is very scarce.

“Only God can help them,” she said.