Woods, 46, said he is giving his body "more time to get stronger" ahead of two tournaments next month.

Tiger Woods announced Tuesday that he will not play in next week’s U.S. Open, scheduled for June 16-19 at The Country Club in Brookline, Massachusetts, ESPN reports.

Woods, 46, said he is giving his body more time to get stronger ahead of the J.P. McManus Pro-Am at Adare Manor in Ireland on July 4-5 and The Open at the Old Course at St. Andrews just over a week later, from July 14-17.

“I previously informed the USGA that I will not be competing in the @usopengolf as my body needs more time to get stronger for major championship golf,” Woods announced in a Tuesday morning post on Twitter. “I do hope and plan to be ready to play in Ireland at the @JPProAm and at @TheOpen next month. I’m excited to get back out there soon!”

The 15-time major golf champion returned to the Masters course in Augusta, Georgia, in April for the first time since the single-car accident in February 2021 that almost cost him his right leg, theGrio reported. The tournament marked his first time returning to competitive golf in more than 500 days. Per The Associated Press, “Woods ended the tournament at the 18th hole with a 13-over 301 — his worst Masters performance as a professional by eight strokes.”

Last month, the three-time U.S. Open champion withdrew from the PGA Championship at Southern Hills after he limped “his way around in the cold and wind, at one point making five straight bogeys,” per The Associated Press. This marked the first time Woods withdrew from a major as a professional. According to ESPN, he complained about his right leg hurting after each of his rounds.

“It’s only going to keep getting stronger,” Woods told reporters before the PGA Championship. “The more I use it, the more strength it gains. Am I ever going to have full mobility? No. Never again. But I’ll be able to get stronger. It’s going to ache, but that’s the way it’s going to be.” 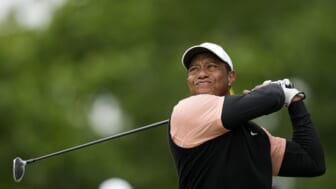 Woods is a five-time champion of the PGA Masters Tournament. His most recent win was three years ago.

In December’s PNC Championship, he finished second alongside his son, Charlie Woods.

Woods continues to recover from a rollover Southern California car crash that severely damaged his leg, ankle and foot. He has reportedly had five surgeries on his left knee and five back surgeries, including spinal fusion.