A police officer in Cincinnati who also appeared on a 2011 TLC reality show has been pulled off the Ohio streets after an outburst using the n-word captured on her body camera.

“F—ing [n-word], I f—ing hate them!” Officer Rose Valentino raged as she punched the steering wheel of her squad car on April 5, according to an internal affairs report following its investigation, NBC News reported.

Valentino was notably irritated because a crowd of vehicles lined up to pick up students at Western Hills University High School wasn’t moving when she activated her lights and siren. The former Police Women of Cincinnati star grew particularly angered, the report revealed, when a Black “male student walked by and gave Officer Valentino the middle finger.”

According to the report from the Cincinnati Police internal affairs department, Valentino told investigators, “This is a hard job, and I was getting to a point where I was really being affected by it,” noting she’s been on the force for fourteen years. Valentino said she plans to seek treatment to relieve her stress and claimed she doesn’t regularly use racial slurs.

Cincinnati Mayor Aftab Pureval said in a statement he “was appalled to see Officer Valentino display such hateful, angry, and racist language. He added: “Our law enforcement represents all of this city, and Black Cincinnatians deserve to feel safe knowing they will be treated with mutual respect.”

Despite her denials, Valentino has been removed from the streets of Cincinnati, relegated to duty behind a desk. 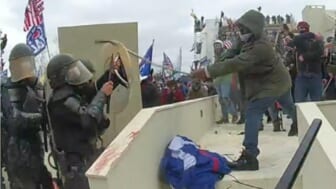 “We hold all of our employees, and especially our sworn police officers, to high standards” said Interim City Manager John Curp in a statement. “The body camera video of Officer Rose Valentino is disturbing. I expect CPD to thoroughly investigate this matter and recommend discipline in strict accordance with the City’s disciplinary procedures.”

Curp asserted that Valentino “will not be on city streets in uniform, wearing a badge, or carrying a firearm.”

The city’s NAACP President Joe Mallory also expressed concern about the officer’s fitness, saying, “To have that agitation, that aggressiveness, that anger, to be triggered like that, it shouldn’t be that easy to be triggered.”