Ernest Ferguson had been involved in several incidents as a corrections officer that were not revealed during a background check for the Savannah police job.

The Savannah, Georgia, police officer who shot and killed Saudi Arai Lee in June had been involved in several documented incidents in his previous employment as a corrections officer that were not revealed during a background check for his police job.

According to the Savannah Morning News, the officer, Ernest Ferguson, worked at the local Coastal State Prison before joining the Savannah Police Department in March 2021. He had been issued several written reprimands from his previous supervisors and a letter of concern from the warden.

The examination of Ferguson’s employment history was first reported by The Current whose reporter reviewed and verified the documents for the report on the Savannah officer’s previous use of force.

Records show that while working at the prison, Ferguson failed to follow a supervisor’s commands to stop using force, shoved an inmate against a wall and used an arm-bar maneuver to take down an inmate. A month before his resignation on March 3, 2021, Ferguson had been involved in multiple use-of-force incidents. The warden had threatened to reduce his salary.

In support of a job with the SPD, Ferguson received strong recommendations from both a prison supervisor and a fellow corrections officer. The latter wrote that Ferguson was a “no nonsense type of guy,” who could be relied upon “whenever there is a disturbance or issues dealing with inmates,” adding that Ferguson was “known to be patriotic,” “with good personal integrity.” Further, the colleague wrote, Ferguson had “very diverse” friends, “but none that are troublesome.”

Ferguson himself did not disclose on a pre-employment questionnaire that he had use-of-force violations at his job as a corrections officer. He wrote, “Never” to a query about any conflicts on previous jobs.

The synopsis of Ferguson’s background check by an independent investigator for the SPD job found that there was “no disqualifying derogatory information per guidelines.” As a result, he was recommended for hire. 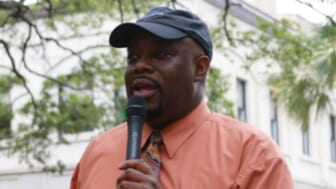 Since joining the SPD, Ferguson has been reprimanded for a failure to activate his body-worn camera on at least three occasions, resulting in disciplinary reviews and a counseling protocol. He has also not followed guidelines for department-issued taser use.

Currently, the white officer is on paid administrative leave while the Georgia Bureau of Investigation and the SPD look into the fatal shooting on June 24.

Lee, 31, a black man who lived in the Carver Village neighborhood of Savannah, was armed with a legally licensed firearm, theGrio has reported. It also noted that clergy members in the city are seeking a federal investigation of the police department.