ATLANTA (AP) — The trial is underway for a man accused of fatally shooting a 7-year-old girl who was riding in a car with her family after a day of Christmas shopping in Atlanta.

Fulton County prosecutor Pat Dutcher said in his opening statement on Friday that Kennedy Maxie was struck by gunfire after the defendant, Daquan Reed, was robbed of his cellphone and money outside the Phipps Plaza mall in Atlanta’s Buckhead neighborhood.

Enraged, Reed picked up a pistol and fired it from the rear passenger seat of a car, Dutcher said, according to the Atlanta Journal-Constitution. After the shooting, Reed got rid of the gun and told people not to talk to police before leaving the area, Dutcher said.

Reed’s attorney, Nicole Fegan, said though Kennedy’s death was “terrible,” her client was innocent, and there was no physical evidence that could establish his guilt.

“He is not guilty for each and every count charged,” she said. 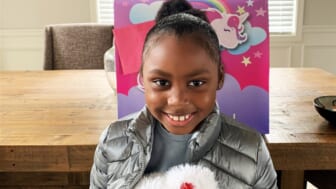 Reed was arrested by the U.S. Marshals Service in Virginia a little more than two weeks after the shooting.

Kennedy was in the car with them, stopped at a red light, when shots rang out. Jade Maxie drove to the hospital, where Kennedy died five days later.

“I will never forget (that day),” Jade Maxie said.