The two music icons have agreed to a hit-for-hit showdown modeled after Verzuz, the popular webcast series that is currently embroiled in legal turmoil with Triller

Diddy appears to have changed his mind after he turned down Jermaine Dupri’s offer to face off in a Verzuz-style event last year.

The music icons have agreed to battle in their own hit-for-hit showdown, creating a space for fans to measure their decades-long catalogs against one another.

With the event, Diddy and Dupri are also taking a stand against TrillerNet, the internet company that owns the video website Triller and Verzuz.

In an Instagram Live video with Dupri, Diddy branded the event “Bad Boy-So So Deaf” after their respective record labels.

“Since we ain’t f***ing with Verzuz no more ’cause they’re f***ing around with our boys … we don’t need to be going against each other,” said Diddy, whose real name is Sean Combs. “It ain’t no Verzuz, it’s just hit for hit.”

“Let’s do it,” Dupri responded.

Diddy clarified in a following video that his frustrations were directed at the parent company rather than Verzuz. TrillerNet bought the series from Swizz and Timbaland in January 2021.

“To clarify it: we’re not f***ing with Triller until they take care of Timb and Swizz for Verzuz,” Diddy said.

Swizz and Timbaland claim Triller has failed to meet its obligations after the company made the first two payments. They say they haven’t received payment since January.

The multi-platinum music producers bedazzled fans on Instagram Live by facing off in the first Verzuz, which launched at the onset of the coronavirus pandemic in 2020 and amid widespread shutdowns across the United States.

The event filled a void left by shuttered live music venues. The internet served as the best avenue for artists to reach listeners, and in many cases earn a living. 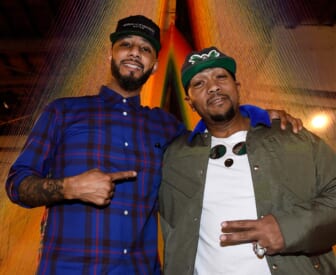 After rappers Ja Rule and Fat Joe appeared in a Verzuz battle at Madison Square Garden in September 2021, Dupri tweeted a selfie outside of the famed Manhattan arena summoning Diddy to a face-off.

“He gon need some training for me,” Dupri said in the call out.

Dupri’s So So Def is responsible for artists such as Xscape, Jagged Edge and Lil’ Bow Wow. Diddy’s Bad Boy Records’ menu of music includes albums from Faith Evans, The Notorious B.I.G. and 112.

“I’ll smash you with just biggie n Mary,” he said before adding, “I do have the upmost respect on you as a musical legend.”

The two have yet to announce an official date for the highly anticipated meeting, but that means more time for fans to revisit each musician’s library of music.