A poll this month of 1,000 registered voters found that only 21 percent believe America is moving in the right direction.

The majority of voters in a new poll believe that President Joe Biden and his administration are leading the United States in the wrong direction, and some think it will only get worse.

According to The Hill, a poll of 1,000 registered voters conducted by NBC News from Aug. 12 to Aug. 16 found that 74 percent of people believe the country is moving in the wrong direction, while 21 percent believe the opposite. In the next five years, according to 34 percent of respondents, the country’s condition will worsen, with 36 percent certain that things will improve.

The poll indicated that 61 percent of those queried are so fed up that they would be willing to march around in protest for a day, as reported by The New York Post. Democratic voters said they would carry “women’s rights,” “abortion rights” and “prosecute Trump” signs during a demonstration, while Republicans would be willing to tote “impeach Biden,” “protect our freedom” and “protect 2nd Amendment” banners.

The Hill noted that Biden recently signed into law the Inflation Reduction Act, which is thought to be a significant legislative victory for his party ahead of the Nov. 8 midterms. The $740 billion plan, a slimmer version of the Build Back Better Act agenda, the Hill notes, focuses on addressing climate change, bringing down health care costs for Americans and reducing inflation.

“In this historic moment, Democrats sided with the American people, and every single Republican in the Congress sided with the special interests in this vote,” Biden said at the Inflation Reduction Act signing ceremony, according to theGrio. “We can protect the already powerful or show the courage to build a future where everybody has an even shot. That’s the America I believe in.” 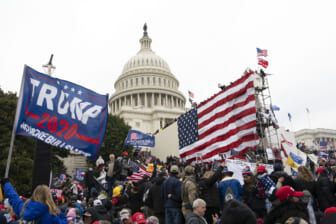 Also Read:
Poll: Nearly half of America say Trump should be charged with a crime for role in Jan. 6 insurrection

Despite Biden’s comments, 42% of people in the NBC poll said the law was a good idea, compared to 31% who disagreed, according to The Hill. More than a third of voters, or 36 percent, said they believed the legislation would have no impact on their life.

Biden’s approval rating inched up to 42 percent in the recent NBC poll, with Democrats, Black voters, urban residents and women among his strongest supporters. With 48 percent of respondents reporting some negative views of the president, his disapproval rating also ticked up, from 54 to 55 percent, since a similar NBC poll in May, according to The Hill. The August poll has a 3.1% margin of error.