The LLWS released a statement saying that they understood “that the actions shown could be perceived as racially insensitive.”

A video clip of Little League World Series players covering a Black player’s head in cotton went viral this week and released a deluge of comments decrying the children’s actions.

The incident occurred during the Boston Red Sox vs. Baltimore Orioles game on Sunday night in South Williamsport, Pennsylvania, where the Little League Classic game is played.

In the 28-second video, the Black player, a member of the Davenport, Iowa team, is sitting as his teammates take stuffing out of giveaway toys and put the cotton-like tufts on his head.

Commenters on social media noted, “That young man does not look ok about what is happening.”

Comedian and actress Leslie Jones of “Saturday Night Live” fame chimed in on the incident, writing on Twitter, ”Ok who the f**k gonna explain this bullsh*t? I’m so tired of people saying they not racist but sit and let racist sh*t happen! Anyone who comes in these comments to rationalize this I will RIP YOUR F**KING HEART OUT! So don’t f**k with me! Where r parents? Look at that boys face!?” 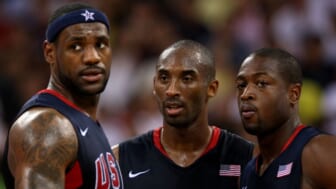 “After speaking with the team,” officials said, “as well as reviewing photos, multiple players on the Midwest Region team were taking part in this while enjoying the game.”

A photo circulating on social media shows a white child who also has the stuffing in his hair.

”As only one player appeared on the broadcast, Little League International understands the actions could be perceived as racially insensitive,” the league statement continued, as reported by HuffPost. “We have spoken with the player’s mother and the coaches, who have assured us that there was no ill-intent behind the action shown during the broadcast.”