Section 241 of the Mississippi Constitution strips voting rights from people convicted of 10 felonies, including forgery, arson and bigamy.

JACKSON, Miss. (AP) — People convicted of certain felonies in Mississippi still won’t be able to vote, as a lawsuit that sought to automatically reinstate their voting rights was struck down by a federal appeals court Wednesday.

Attorneys who challenged the provision had argued the authors of the state’s 1890 constitution showed racist intent when they chose which felonies would cause people to lose the right to vote, picking crimes they thought were more likely to be committed by Black people.

The Mississippi Center for Justice brought the lawsuit, and attorney Rob McDuff said the center will ask the U.S. Supreme Court to overturn the ruling handed down Wednesday by the 5th Circuit Court of Appeals.

Vangela M. Wade, the center’s president and CEO, said the ruling “doubles down” on years of Black disenfranchisement.

“Access to democracy should not hinge on outdated laws designed to prevent people from voting based on the color of their skin,” Wade said in a statement.

Section 241 of the Mississippi Constitution strips voting rights from people convicted of 10 felonies, including forgery, arson and bigamy. The state attorney general issued an opinion in 2009 that expanded the list to 22 crimes, including timber larceny, carjacking, felony-level shoplifting and felony-level bad check writing. 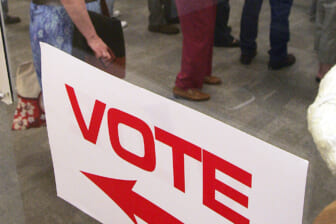 In the case decided Wednesday, the plaintiffs did not challenge the disenfranchisement of people convicted of murder or rape.

In 1950, attorneys representing the state said Mississippi dropped burglary from the list of disenfranchising crimes. Murder and rape were added to the list in 1968. The attorneys said in written arguments that those changes “cured any discriminatory taint on the original provision.”

A majority of the appeals court agreed with the state’s arguments.

“Plaintiffs failed to meet their burden of showing that the current version of Section 241 was motivated by discriminatory intent,” the majority wrote. “In addition, Mississippi has conclusively shown that any taint associated with Section 241 has been cured.”

In a dissent, Judge James Graves — who is Black and from Mississippi — wrote that the majority of the appeals court had upheld “a provision enacted in 1890 that was expressly aimed at preventing Black Mississippians from voting” and that the court had done so “by concluding that a virtually all-white electorate and legislature, otherwise engaged in massive and violent resistance to the Civil Rights Movement, ‘cleansed’ that provision in 1968” by adding crimes that were considered to be race-neutral. 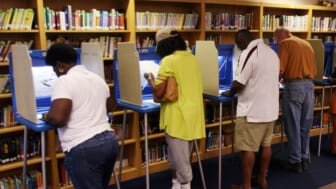 “Handed an opportunity to right a 130-year-old wrong, the majority instead upholds it,” Graves wrote.

To regain voting rights in Mississippi now, a person convicted of a disenfranchising crime must receive a governor’s pardon or must win permission from two-thirds of the state House and Senate. Legislators in recent years have passed a small number of bills to restore voting rights.

Federal lawsuits were filed in Mississippi in 2017 and 2018 seeking automatic restoration of voting rights for people who had finished serving sentences for disenfranchising crimes. The case decided Wednesday is from the lawsuit filed in 2017.

A panel of 5th Circuit judges heard arguments in December 2019 from the other case, which makes different arguments. That panel has not issued a ruling.