Erivo stars alongside Tom Hanks in this live-action retelling of the beloved Disney classic.

Get ready for a new Pinocchio for the next generation. Disney has released a full-length trailer for the upcoming live-action “Pinocchio,” which features Cynthia Erivo tackling one of the House of Mouse’s signature songs, “When You Wish Upon a Star.”

A beloved classic, “Pinocchio” was only the second animated film from Walt Disney Productions when it premiered in 1940. Now, more than eight decades later, the story is getting a fresh retelling courtesy of filmmaker Robert Zemeckis (“The Polar Express”) and introduces a new generation to the famous puppet, his father, Geppetto, (played by Tom Hanks) and of course, the Blue Fairy (played by Erivo.)

While the first trailer merely hinted at Pinocchio’s transformation and adventure, this one wastes no time getting right into the action, reacquainting audiences with Geppetto’s world. After Geppetto wishes on a star for a son, the Blue Fairy grants his wish, bringing his puppet, Pinocchio, to life.

Showcasing his transformation, the trailer also hints at the journey the Blue Fairy sets Pinocchio on at the beginning of the story, promising to turn him into a “real boy” if he remains “brave, truthful and selfless.”

The highlight of the trailer is, of course, the use of Erivo’s rendition of “When You Wish Upon a Star.” Singing over the latter half of the clip, Erivo’s voice soars while belting out the tune, which won the 1940 Academy Award for best original song.

Also starring in the film are Keegan-Michael Key as “Honest” John and Joseph Gordon-Levitt as Jiminy Cricket, with Benjamin Evan Ainsworth voicing the titular character. 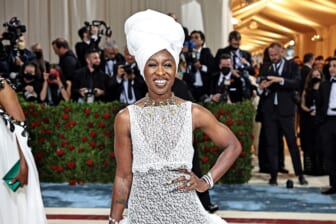 Back when Erivo was announced as the Blue Fairy, the Tony Award-winning actress opened up to Variety about her new role. Speaking to the power of representation, she told the outlet, “I know that already it’s a different aesthetic because it’s me — this bald-headed Black girl. I’m really excited about it. We don’t have very many Black fairies.”